The orgasm has always been a point of focus for sex researchers. Few areas in sexuality are so sensitive and interesting at the same time. The female climax in particular continues to present many mysteries. But how does an orgasm work, and what exactly happens when it occurs?

Climax and How it is Influenced

Through a complex interplay of physical reactions, feelings and fantasies an orgasm is triggered. There are a number of indicators that are associated with sexual climax. An increase in respiratory rate, blood pressure, and pulse rate, as well as sweating or body twitches, are characteristic of an orgasm. In the vagina and uterus, rhythmic contractions occur that are perceived as extremely pleasurable. If climax is achieved again, this is termed having multiple orgasms. The duration of the orgasm can range between a few seconds up to one minute.

While every woman privately fantasizes about it and knows at least in theory how an orgasm works, realty shows that not every woman orgasms regularly. Even more troubling, some women have never had an orgasm in their life. While men generally have no difficulty reaching sexual climax, the female orgasm is not always guaranteed. According to estimates, every fifth woman only sometimes reaches orgasm, and every tenth only experiences orgasm very rarely or not at all. For about 16 to 17 percent of women, having an orgasm exists only in the imagination. Although a stage of heightened arousal is often reached, climax remains elusive.

Many factors influence whether a woman can "come" during intercourse. Although physical causes such as obesity, diabetes, depression, hormone deficiency or neurological disorders can be to blame for difficulties achieving orgasm, the inability to climax is most often triggered psychologically. Everyday problems, stress or conflicts in the relationship can cause low libido and loss of arousal, preventing climax. The inability to just “let go” and completely surrender to the sexual experience can also impede female sexuality. Last but not least, one’s own experiences and upbringing can play a significant role. A conservative upbringing can often affect sexuality, which is why many do not dare speak openly about their sexual desires. One of the most common reasons why women don’t experience orgasm is the lack of knowledge about their own bodies. Only when a woman knows how her body works and what touches she needs to become sufficiently aroused, can she communicate her preferences to her partner as well. Below you will find a number of tips that should help increase your chances of achieving the ultimate orgasm:

In order to climax, it is important to relax and clear your mind. Thoughts that revolve around problems at work, stress with the kids or tiresome household chores should be banned from the bedroom. You should also try to block out any thoughts of uncertainty and doubt regarding your own attractiveness. Banish all those thoughts from your mind. To fuel your desire, you should completely surrender yourself to the moment. This is often easier said than done. Relaxation exercises such as yoga and autogenic training can help you with this.

While men often quickly get to the point and place less emphasis on extended foreplay, this is usually essential for women in order to reach critical arousal and the ultimate orgasm. In line with this, three out of four women say that foreplay is more important than the actual intercourse. To recognize the importance of foreplay, it helps to know that the sexual response cycle is divided into four phases: The first phase is the excitement phase, which begins during foreplay. After this, the second phase begins (the plateau phase), during which the vagina becomes moist and the body becomes tense. If the plateau phase is exceeded, the orgasm phase follows. Since the majority of women do not make it beyond the second phase, it is important that the partners take time for extended foreplay in order to slowly increase arousal. During so-called "petting," the couple should focus on erogenous zones such as the ears, neck, toes and inner thighs because stimulation of these body parts can also contribute to arousal. The female reproductive organs are overstimulated quickly, so avoid placing excessive emphasis on the clitoris. Stroking and massaging each other and even dirty talk can elevate your desire. With increased arousal, more blood flows to the clitoris, allowing it to swell and become more sensitive. 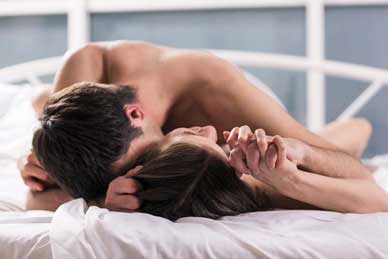 According to the American sex researcher Shere Hite, only 30 percent of women reach orgasm during vaginal intercourse. Climax is triggered by adequate stimulation of the clitoris (the most important organ of female pleasure). Previously, the clitoral (via stimulation of the clitoris) and the vaginal (triggered by the penis in the vagina) orgasm were strictly distinguished from one another, but now we know that every climax is a clitoral one, because the wall of the vagina has hardly any nerve endings, and because the tissue of the clitoris is not just limited to the outer visible part but is larger and projects further into the vagina than previously thought.

Since most women can’t “come” from vaginal penetration alone, additional stimulation is warranted. Therefore, it is important that the small section of tissue above the vagina (called the clitoris) is additionally stimulated during intercourse by hand. In order to achieve an orgasm, the clitoris should be gently stroked or rubbed—stimulation that is too direct, however, can be perceived as unpleasant and painful. Stimulating the clitoris with the tongue can also be extremely pleasurable. Since every woman reacts differently, it is important that you show your partner which touches are enjoyable to you. Sex consultants sometimes give men the advice to train their fine motor skills with the help of fruit. For example, by cutting open an orange and placing a pea on its surface. The pea should then be lightly moved with the tongue or finger without getting pressed into the orange, because this would be the equivalent of too much pressure being put on the clitoris.

Positions That Increase the Chance of Orgasm

For the majority of women, the cowgirl position is considered a safe bet to achieve orgasm. The advantage: In this position, she can control the pace and depth of penetration herself. This ensures excellent, sustained clitoral stimulation. In the case of difficulty achieving orgasm, the reverse cowgirl position (the woman sits on the man backwards) is a suitable choice, because it can stimulate the clitoris even more intensely. If this still doesn’t lead to success, scientists have found the ultimate orgasm position: The so-called coital alignment technique (CAT) is said to achieve maximal clitoral stimulation, which can facilitate the ultimate orgasm. This position is a variant of the missionary position. The difference: When applying the coital alignment technique, the penis is in an almost vertical position, rather than a horizontal one. The man lies on top of the woman, but his upper body slides up to her shoulders. This allows for ideal stimulation of the clitoris. Studies claim that this position enabled women who were having difficulty achieving orgasm to increase the frequency of their orgasms by 56 percent.

Cultivate Your Own Fantasies 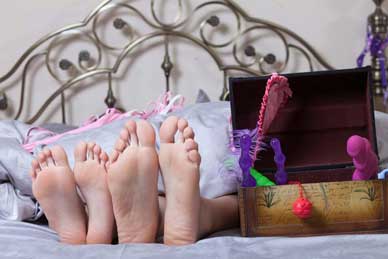 The use of sex toys can also help you to better achieve orgasm. Brushes, handcuffs, towels, massage oil—today’s possibilities are nearly endless. A vibrator can also be incorporated into sex with your partner. This allows you to stimulate your clitoris during penetration. The vibrating effect on the nerves of the clitoris can trigger an orgasm. Vibrators are now available in all shapes and designs, so that there is sure to be a model for every taste. So-called love balls (or Ben Wa balls) are also highly effective. These small spherical shapes are inserted into the vagina in order to amplify arousal. Love balls can also aid in strengthening and tightening the pelvic muscles which in turn improves the overall sexual experience. They can also be easily integrated into everyday life. Targeted training of the pelvic floor improves strength, endurance and the ability to achieve the ultimate orgasm.

Who would have thought that even certain foods can enhance sexual desire? For example, Brazil nuts, oysters and celery have an aphrodisiac effect. In addition, various herbs, such as horseradish, mustard, basil, ginger and garlic act extremely stimulating. Plant-based substances like Maca and Muira puama (a plant native to Brazil) are also known to enhance sexual desire. Test subjects who consumed this active ingredient reported an improved ability to reach orgasm and more intense orgasms in general. A similar effect is achieved with Ginseng (a mountain plant from Asia). Some of the more unusual aphrodisiacs include cannabis oils and creams, because THC (tetrahydrocannabinol) and other cannabinoids, which are contained in these products, can be easily absorbed through the mucous membranes. Consider incorporating some of these potent aphrodisiacs in your own love life.

Don’t Put Yourself Under Pressure

The magic phrase in the bedroom is: Don’t put yourself under pressure. If you have trouble reaching orgasm, avert your attention to other things. Even without climaxing, sex can be enjoyable and satisfying. Don’t subject yourself to any performance pressure, and don’t fake having an orgasm for your partner. This will help neither of you. Relax, let yourself go and just enjoy. If you think of having an orgasm as a nice addition rather than a necessity, you yourself will become more relaxed and thereby increase your chances of having an orgasm. With this in mind: Let yourself be taken on an erotic journey that will gradually increase your desire and hopefully catapult you towards sexual nirvana.