In a double-blind, placebo-controlled study conducted in Germany, 60 women and 60 men were divided into three treatment groups:

Test participants ranged in age from 35–65 years, with an average age of 47. All suffered from a self-reported loss of libido.

The criterion for the assessment was how the participants’ libido (defined as sexual desire irrespective of the actual sexual act) was influenced by taking either the placebo, a standard maca preparation or Macabido®.

The test subjects were asked to complete various questionnaires both before and after the four-week treatment period. These questionnaires inquired, among other things, about their sexual fantasies, their sexual excitability and also their physical condition and energy levels. At the end of treatment, all subjects were asked to assess the overall effect of their treatment and, irrespective of the effect, were asked how well they tolerated the preparations.

Both the maca and the Macabido® groups reported experiencing a positive effect as compared to the placebo group, with the positive effects of
Macabido® being considerably stronger than those of standard maca.

DIFFERENCES BETWEEN MEN AND WOMEN:

In the placebo group, the self-reported libido levels of the women had worsened after four weeks of treatment, as compared to when the study began. Men in the placebo group reported a slightly positive effect.

IN THE MACA GROUP:

3 percent of participants were dissatisfied, 35 percent noticed no effect (i.e. no improvement), and slightly more than 60 % noticed a significant improvement in libido.

IN THE MACABIDO® GROUP:

2 percent of participants were dissatisfied, 5 percent noticed no effect, and 92 percent reported a significant improvement in libido, as well as an increase in overall energy levels and feelings of wellbeing. From this data it’s obvious that standard maca preparations have a positive effect only up to a point. In contrast, the positive effects of Macabido® are unequivocal, and statistically significant.

Consequently, it appears likely that the specific combination of herbs found in Macabido® offers the possibility of achieving markedly better results than traditional maca preparations, even when taken over a longer term. Dr. Jan-Dirk Fauteck MD, director of a research facility which conducts clinical trials in Munster, Germany and one of the researchers in the Macabido® study, sums up the findings:

The results of a study in which 120 subjects were examined over a period of several weeks show that Macabido® contains a harmonious blend of highly-concentrated maca and other plant ingredients optimally tailored to the specific requirements of men and women. Macabido® appeared to be considerably more potent when it comes to supporting healthy energy levels, general well-being, and healthy sexual desire than standard maca preparations.

Change of Libido in Men and Woman > 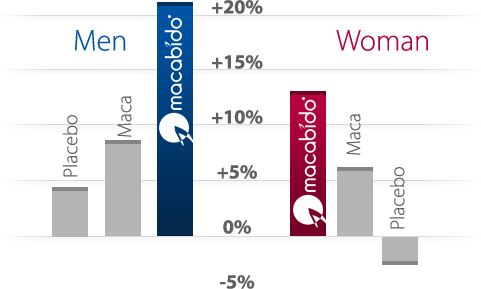