Female desire has been proven to fall dramatically during a long-term relationship, often putting stress on the relationship.

What Research Says about Committed Relationships

A recent study done by German scientists discovered that in committed heterosexual relationships, generally the man and the woman will start out the relationship with the same level of sexual desire. While the man's libido will decline very gradually over the years, the woman's desire will fall much more dramatically. This study involved 2500 committed couples, enough to provide a reliable generalization. This dramatic drop in female desire calls into question the traditional notion that women are better suited for monogamy than men. Loss of female desire is a complex subject, however, and various factors influence a woman's libido, including hormones, stress and relationship strain.

The Effect of High Prolactin Levels on Female Desire

Studies have shown that people who are in long-term relationships have higher levels of oxytocin in their blood—a hormone that causes emotional attachment, cooperation and feelings of love. Common sense, right? Of course committed relationships cause feelings of attachment and love. However, it gets a little more complicated than that. After a couple has an orgasm together, the hormone dopamine is released. Dopamine is responsible for feeling a sense of reward and pleasure. Then, dopamine levels fall rapidly and it is replaced by rising levels of the hormone prolactin.

Prolactin is responsible for that feeling of sleepy contentment after an orgasm. Yet, in the long-term, high prolactin levels cause loss of libido as well as compounding symptoms like anxiety, depression, mood swings and headaches. A study done with wild monkeys also showed that high prolactin levels are associated with a feeling of despair. Now, scientists have not yet determined exactly how prolactin and relationships interact, but it is still a plausible speculative reason why some relationships may start out with lots of sex and burn out soon afterward. 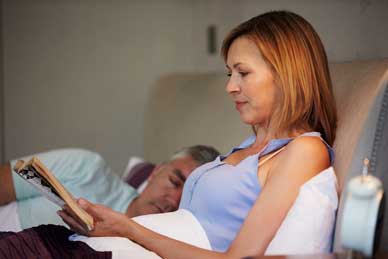 Traditionally in Western culture there has been the stereotype that men constantly desire sex, while there is no such stereotype about women. One theory about the loss of sexual desire in long-term relationships states that cultural standards about sexual desire keep men from succumbing to the natural loss of desire that women experience. Men don't want to go against the grain of what typical masculinity is supposed to look like, and this subconscious desire influences their sex drives to remain high. Women, on the other hand, are not expected to have a constantly high sexual drive in order to be properly feminine or respected by their peers, and as such, they have no psychological barriers preventing them from naturally losing their desire over the course of a relationship.

Of course, this is only one theory, and it is one that has no research to back it up. Although cultural factors are certainly something to be considered, there are many other influences on female desire as well.

Other Factors That Come into Play

Environmental factors are also a huge influence on libido, both for men and women. A strained relationship that leaves a woman feeling emotionally neglected may cause her to lose interest in sex, considering that sexual desire for women is generally more tied in with emotions than the sexual desire of men. A busy or stressful life can leave either party tired and burnt-out at the end of the day and they would rather just go to bed. A lack of sexual novelty over the years can also reduce sexual desire, as doing the same things every night can get boring quickly.

What Couples Can Do about the Natural Decline in Desire

The empirical decline of female sexual desire is absolutely not a death sentence for any long-term relationship. Honesty, openness and compassion are crucial for any couple. If a couple is honest about their desires, sexual preferences and fantasies, enter a relationship having realistic expectations for how their sex life might look in 10 years and resolve all differences and conflicts with benevolence, empathy, and love, the couple can overcome the disappointment of sexual decline and grow old together happily.