Toxins in Fast Food Linked to Low Libido and More

Certain toxins in fast food may have a wide range of potential adverse health effects and have been linked to reproductive problems, thyroid disease, low libido and more.

A recent study looking at toxin exposure from fast food was conducted by the Milken Institute School of Public Health and published in the journal Environmental Health Perspectives. Nearly 9,000 participants answered questionnaires about their recent food intake in the past 24 hours and gave a urine sample. The researchers found that those who had eaten fast food in the past 24 hours had up to 40 percent higher levels of phthalates in their urine. Additionally, those who had recently eaten fast food also had higher BPA levels. Researchers noted that meat and grains were the types of food most correlated with a rise in toxin levels.

Why Is Fast Food So Toxic?

Fast food contains higher-than-normal levels of certain toxins because there is a high level of exposure to toxins (especially from plastic) during the manufacturing and packaging processes. Because fast food is highly processed, it is in contact with plastic packaging for many steps of the way. For example, to make a hamburger patty, slabs of meat may be sent from the slaughterhouse to another facility where it will be ground up, and transported in plastic packaging. After being ground up, it may again be wrapped in plastic and sold to a different company who creates the patties. After the raw ground beef is molded into patties, the patties are again wrapped in plastic before finally making their way to the fast-food restaurant where they will be eaten. Overall, the more processed a food is, the more likely it is to be harmful to your health.

The Harmful Effects of BPA and Phthalates

BPA is a chemical used to manufacture hard plastics as well as epoxy resins. BPA is believed to cause a myriad of problems in the human body including altering thyroid activity, disrupting hormones, causing birth defects, contributing to migraine headaches and being responsible for behavioral problems in young children. Researchers found detectable levels of BPA in 93 percent of over 2,500 urine samples from the general population. This is unsurprising, given that BPA is present in many products we come into contact with daily, including food and drink packaging, CDs, medical devices, dental sealants, infant formula bottles and more.

Phthalates are similar to BPA in that they are found in a huge number of consumer products, despite their possible negative repercussions on health. Phthalates are used to make plastics more bendable and are found in manufacturing equipment, food packaging, medical devices, personal care products and more. Phthalates can disrupt the endocrine system, possibly causing problems ranging from thyroid disease, to infertility and low libido. Phthalates may even contribute to the development of liver cancer, according to data from studies done on laboratory animals. Like BPA, phthalates may also cause birth defects. Phthalates have also been linked to a higher risk of giving birth prematurely. 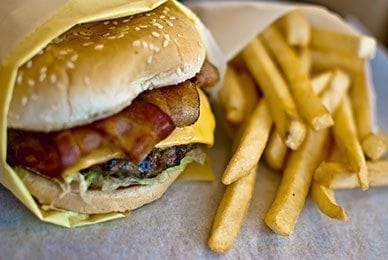 It requires a moderate lifestyle change in order to reduce your exposure to harmful chemicals such as BPA and phthalates. Of course, toxins in fast food can be avoided by simply not eating fast food, but there are other steps you can take. Reducing toxin exposure from plastics may be an especially important priority for mothers and mothers-to-be, as phthalates and BPA affect children and fetuses with greater severity than they do adults.

Eat as many whole foods as possible. In addition to avoiding fast food, make sure that the foods you buy at the grocery store are as non-processed as possible. Cooking from scratch is a good idea, as is buying organic. Try to buy foods stored in non-plastic containers. In addition to containing fewer toxins than fast food, homemade recipes using whole foods can also be much more nutritious—there are very many reasons to avoid eating fast food.

Avoid using plastic in the kitchen. Dishes, utensils, bottles, and cutting boards all may contain BPA. Although you can buy certified BPA-free products, you may not be able to afford to replace every single plastic item in your home. You can greatly reduce your risk of toxin exposure by never using plastic for hot foods, or putting plastic in the microwave, as heat releases BPA.