A recent study found that pregnant women who are exposed to high amounts of phthalates—chemicals structurally similar to hormones that are found in everything from plastics to personal care products like shampoo and perfume—are more likely to deliver their babies weeks before their due date.

Women Exposed to Phthalates Twice as Likely to Deliver Prematurely

In the study, published in JAMA Pediatrics, researchers from the University of Michigan School of Public Health examined the urine of 130 women who had delivered preterm (earlier than 37 weeks) and 352 women who carried their babies full term throughout their pregnancies. They were specifically looking for phthalate metabolites, the level of which would correspond to the woman's exposure to phthalates during her pregnancy. 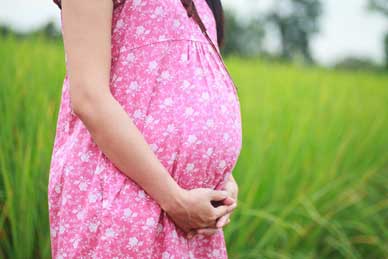 A statement from the researchers, led by University of Michigan School of Public Health's Kelly K. Ferguson, sums up their findings: “Our results indicate a significant association between exposure to phthalates during pregnancy and preterm birth, which solidifies prior laboratory and epidemiologic evidence. Furthermore, as exposure to phthalates is widespread and because the prevalence of preterm birth among women in our study cohort was similar to that in the general population, our results are generalizable to women in the United States and elsewhere. These data provide strong support for taking action in the prevention or reduction of phthalate exposure during pregnancy.”

Phthalates are chemical compounds that have become popular in the last fifty years or so and are widely used in plastics, perfumes, personal care items like shampoo, lotion and hairspray, and are also found in processed and canned foods. Because they are everywhere, it's estimated that a whopping 95 percent of the population has evidence of phthalates in their urine. In past studies, exposure to phthalates has been linked to conditions associated with hormone imbalance such as thyroid imbalance, endometriosis and breast cancer, but this is the first study linking phthalates to a higher risk for preterm delivery.

It is not known exactly how exposure to phthalates affects gestation, but it may have to do with some of the side effects thought to be caused by phthalate exposure, like intra-uterine inflammation, compromised immune system, and hormone imbalance. Based on this study, even if you're not pregnant, it is advisable to avoid phthalates in your environment, as they are well-known to contribute to hormonal imbalance. Buy all-natural personal care products, cleaning products and laundry detergents and avoid commercial perfumes. When grocery shopping, skip the processed foods, and buy only whole foods and organic meats and vegetables whenever possible.