The Top 6 Immune Boosting Herbs for Cold and Flu Season

The incidences of cold and flu increase greatly during the colder months.  The exact timing of the beginning of "flu season" varies, but it's usually around October. Although it's possible to get a flu vaccine, its effectiveness is often disputed, and there is no vaccine for the common cold. The alternative: Natural Herbs.

Immune boosting herbs are a great way to help your body naturally fight off infections, safely and with no side effects.  Usually, a blend of herbs combined with adequate intake of essential vitamins and minerals will be most effective for helping to ward off the flu and the common cold.

Eleuthero is short for Eleutherococcus senticosus.  This plant, also known as Siberian ginseng, is a small, woody shrub that grows in Northeastern Asia.  It has been used in the traditional folk medicines of China, Siberia and Russia for thousands of years, for the purposes of increasing general health and physical stamina.

This is a great herb for boosting the immune system thanks to active compounds, known as eleutherosides, that help stimulate healthy immune function.  Modern science supports the traditional use of eleuthero for supporting the immune system; a double-blind study found that people who took an eleuthero tincture experienced an increase in T-lymphocytes, which are a type of cell important for immune function.  The study saw no side effects due to this herb.  Siberian ginseng also carries other health benefits, including helping the body to better cope with stress and combating cell damage caused by free radicals. 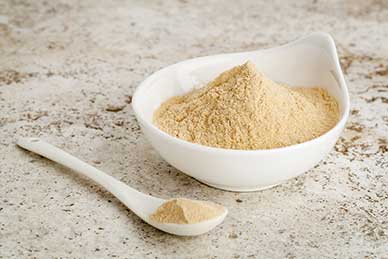 Maca, or Lepidium meyenii, is a tuberous vegetable that grows in the Andes highlands.  It's been used as a traditional medicine for thousands of years by native peoples.  Modern medical science has been discovering many new health benefits of this herb.  The plant supports a healthy immune system due to its high levels of magnesium.  This mineral plays many different roles in the body's immune system.  Maca has been shown to have a positive effect on overall well-being.  Taking maca can help protect against cold and flu as well as help you to cope psychologically if these illnesses do occur.

Ginger is a pungent root herb, known to science as Zinziber officinale, that can help protect against illness during the cold and flu season.  According to an article published in the journal BMC Complementary and Alternative Medicine in 2008, ginger helps to activate T-cells, which are white blood cells that destroy infected cells.  Another study, published in the International Journal of Nutrition and Metabolismin 2010, found that giving rats ginger helped protect the animals' bodies against the harmful effects of foreign substances.  Yet another way that ginger can help protect your body is through its antioxidant effects. 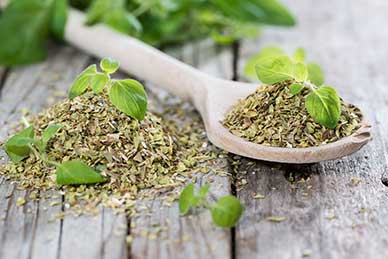 You're probably quite familiar with oregano, as it's very popular in Italian and Italian-American cuisines.  The scientific name of this aromatic herb is Origanum vulgare.  Although it's native to the Mediterranean region, it's found all over the world due to how easy it is to grow.  It's good for both the immune system and the respiratory system, making it one of the best immune boosting herbs for common illnesses that affect the respiratory system, such as colds.  One study done on animals found that taking an oregano supplement increased white blood cells.  The immune-boosting effect of oregano is thought to be due to the plant's flavonoid content.  Additionally, there is some evidence that oregano has anti-viral properties.

Ginseng refers to the Panax genus of plants, which includes at least 10 species.  All of these species have similar health benefits.  The root of this plant contains a wide variety of compounds and minerals that can give your immune system an extra boost, explaining why ginseng has been an important plant in traditional Chinese and Native American medicines for millennia.  One study, involving over 200 people, found that people who took ginseng contracted colds and flu two-thirds less frequently.  Another similar study came to the same conclusion: Among over 300 volunteers, those who took ginseng daily had fewer colds and the colds they did have were shorter and less severe. 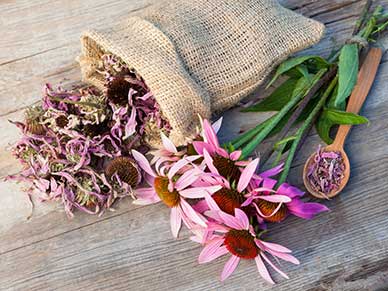 Echinacea is a genus of nine species of flowering plants in the daisy family.  The plant is found only in Eastern and Central North America.  Echinacea provides phenolic compounds, and these chemicals are known to increase immune activity, including the body's numbers of T-cells and macrophages.  Echinacea also increases the production of interferons, which are immune cells that keep viruses from replicating.  There are many studies documenting the immune-related benefits of Echinacea.  One review that looked at 14 different clinical trials concluded that Echinacea reduces the odds of getting a cold by 58 percent, and in colds that do occur, the length of sickness is reduced by one to four days.