A recent scientific study reveals that the consumption of soy increases bone strength in women, particularly those impacted by menopause. This short piece will examine the influence menopause has on a woman's body, how menopause can significantly impact bone health, the results of a study chronicling how soy and soy products may help menopausal and post-menopausal women retain bone vitality as well as offer dietary suggestions regarding how women can consume greater quantities of soy.

Menopause is a life stage all women who live to a certain age will experience. Typically, the event begins in the late forties or early fifties and is often categorized by a diminishing number of menstrual cycles. Eventually, periods cease altogether marking the time when the impacted individual will no longer be able to bear children.

In most healthy women, menopause is precipitated by a decrease in function of major sexual and reproductive organs such as the ovaries. This diminished function leads to a precipitous drop in systemic production and distribution of important hormones like estrogen and progesterone.

How Does Menopause Impact Bone Vitality?

Many medical professionals opine that estrogen and progesterone play a significant role in maintaining bone strength. When women reach their mid-thirties, their bones typically stop growing and natural but gradual bone loss might occur. However, steadily flowing hormones possess properties that enable bones to maintain a certain level of strength and overcome any bone loss. That said, when hormone production drops, bones are no longer subject to this protective measure and could be susceptible to potential maladies such as bruises and fractures.

One of the most serious issues that could impact a menopausal or post-menopausal woman's bone health is osteoporosis. The bones of someone affected with this condition lose significant amounts of bone mass. The bone loss could progress to such a degree that these bodily structures may develop holes that grow and create further and further weakening. Eventually, the bones give out leaving the stricken individual susceptible to pain and, in some cases, serious mobility problems that could lead to disability. 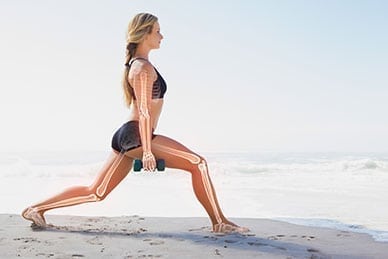 Many medical professionals stress the importance of maintaining bone health to menopausal and post-menopausal women and are continually searching for various therapeutic protocols geared towards accomplishing this task. Dietary changes are often a common treatment option. A recent study suggests soy might be an effective dietary ally.

Researchers representing the University of Missouri at Columbia have discovered that a diet rich in soy protein could not only slow but perhaps counter the bone ailments precipitated by the onset of menopause. The examiners studied the impact a soy-laden diet had on female rats. The animals were divided into two groups: one grouping was fed soy, while the other was fed corn-based food products. The trial lasted for a duration of 30 weeks and all subjects were administered the same amount of calories on a daily basis. Scientists found that those subjects who consumed soy experienced a strengthening of specific bones. The rats who consumed primarily corn showed no changes in bone structure.

In another surprising discovery, researchers also concluded that the subjects who consumed soy also witnessed an improvement in their overall metabolic function. Researchers stress that the heightened metabolic rates were detected in all test subjects regardless of whether they had ovaries or not. The authors of the study opine that such findings might suggest that soy could potentially benefit the bone health of all women and not merely those going through menopause.

How to Incorporate More Soy in Your Diet

Soy is an ingredient is many commonly consumed foods and beverages including:

Soymilk is available for purchase in many supermarkets as a stand alone product. However, soymilk can also be found in various coffee creamers and yogurt-based products.

This product is a type of not fully ripe green soybeans. These vegetables are often included in salads, as side dishes to various meals or may be served alone as an appetizer.

Also known as soybean curd, tofu can be prepared in a variety of ways and is commonly used in Asian cuisine.

In addition to the aforementioned products, which are known for containing high quantities of soy and are sometimes synonymous with the nutrient, soy is found in other commonly consumed items such as: