One of the most commonly ignored or misdiagnosed causes of many health issues is excess estrogen. This condition negatively affects several of the body's functions.

One environmental factor that affects households, especially those in metropolitan areas or any area where residents drink "city" water, is the presence of estrogen in the water. Though facilities filter out harmful organisms and elements, the hormones in birth control pills excreted through bodily waste can enter the water supply. A second cause is the transition into menopause, when the ovaries begin to slow down the production of progesterone and ovulation slows down or ceases to occur. This means that the stage of the menstrual cycle in which progesterone is produced no longer exists, so estrogen is not counter-balanced, causing an improper ratio of estrogen. When this occurs, levels of estrogen may still be low, but as long as estrogen outweighs progesterone, there is an imbalance and problems occur. Other causes of too much estrogen are xenoestrogen and phytoestrogen. Below are three common signs of estrogen overload.

Fibroids, benign tumors that grow on the uterus, are more and more common because of the excessive intake of xenoestrogens and phytoestrogens. Xenoestrogen, meaning "foreign" estrogen, usually consists of chemicals that imitate estrogen in the body, thus increasing the overall amount of estrogen in the body. Sources include plastics (watch out for BPA), animal products and pesticides. Phytoestrogen, meaning "plant" estrogen, is estrogen that was not created in the body, like xenoestrogen, and comes from plant sources like soy and flax seeds. Although some xenoestrogens act as estrogen antagonists in some instances, they are a major source of fuel for fibroid tumors.

Research has concluded that estrogen feeds fibroid tumors. One observation shows this truth in the absence of fibroids in prepubertal children and the subsiding or degeneration of fibroids in postmenopausal women. Thus, fibroids are the most common during childbearing age, as this is the stage when estrogen production in the body is the highest. When you combine the naturally produced estrogen in a childbearing woman's body with the additional estrogen sources listed above, estrogen dominance inevitably occurs. When estrogen is not balanced with progesterone, but dominates instead, it causes a wealth of health problems like myomas, or fibroids. Some women may not have debilitating symptoms, or the symptoms may be falsely attributed to some other factor. Therefore, they go undiagnosed. Others suffer from painful and/or life-threatening effects. Following are some common symptoms of fibroids that should not be ignored: 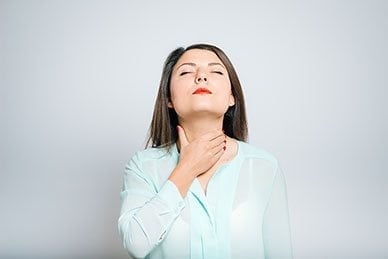 Hypothyroidism occurs when the thyroid gland does not produce enough thyroid hormones T3 or T4. This affects many processes in the body, such as metabolism, blood flow, energy levels and even can lead to mineral deficiencies. TSH (Thyroid Stimulating Hormone) will actually increase as it attempts to raise the level of thyroid hormones in response to a lack of them. Numerous studies show that there is a link between excess estrogen and thyroid function. For instance, one study found that women with hypothyroidism receiving estrogen therapy had to increase their thyroxine dosage.

Women are eight times more likely to experience hypothyroidism than men because of the hormonal differences. Men do not typically have too much estrogen since they naturally do not produce as much as women. They can, however, intake massive amounts of xenoestrogens and phytoestrogens, which can lead to a domino effect of issues. Estrogen has the capability to interfere with any of the body's systems. Dana Trentini, author of the "hypothyroidmom" website, explains how estrogen dominance leads to hypothyroidism: Estrogen dominance leads to the liver's production of high quantities of thyroid binding globulin protein, which inhibits thyroid hormones and renders the hormones unable to be utilized by the cells.

Hypothyroidism has many symptoms, including but not limited to fatigue and lethargy, heavy periods, anxiety, depression, low libido, heart palpitations, dry eyes, brain fog, constipation and cold hands and feet.

Too much estrogen may lead to low libido. Estrogen is naturally a testosterone (the hormone associated with a healthy libido) antagonist or anti-androgen. This means that estrogen blocks testosterone. Considering that nature has distinguished between the sexes by altering the amount of testosterone and estrogen, it would make sense that the two hormones cannot coexist in equal amounts. Therefore, estrogen's anti-androgen quality would only seem natural. However, this natural propensity for a predominantly female hormone to repel a predominately male hormone can easily become a fiasco when estrogen levels are too high. When there's a lot of estrogen, then more testosterone is blocked, leading to a low libido. Other issues, like hypothyroidism (caused by too much estrogen) can exacerbate low libido.