The Dangerous Link Between Soy and Libido

Soy is a legume that has long been a staple of East Asian cuisine. Today, soy has risen in popularity and soybeans are used to make a wide variety of foods including tofu, soy milk, soy sauce, toasted soybean snacks, miso, edamame, soy flour and even soy-based infant formula. Soy foods are high in vitamins and minerals and are also an effective source of protein for those following vegetarian or vegan diets. Soy-based foods are also versatile and cheap. However, despite all of these advantages, having a high-soy diet carries serious drawbacks.

Many of the chemicals found in soy can be very harmful. Phytates found in soy block absorption of essential minerals, including iron, calcium and zinc. Trypsin inhibitors found in soy interfere with protein digestion. Goitrogens are other compounds found in soy that can cause hypothyroidism and other thyroid conditions. Hemagglutinin is a substance that causes red blood cells to clump together. This can keep them from being able to distribute oxygen to your body efficiently. Soy also contains high levels of the metal aluminum, which can harm your kidneys and nervous system.

High-soy diets can compromise immune function. A study found that mice given soy phytoestrogens experienced shrinkage of the thymus gland, which is an important part of the immune system. Another study surveyed over 800 people to find that babies fed soy-based formula during infancy used more asthma and allergy medications in adulthood.

Children are especially susceptible to the negative health effects of soy. Phytoestrogen exposure in children who are fed soy-based formulas has been found to be up to 11 times higher than adults who eat soy foods, the same amount they would get from taking five birth control pills daily. Unfortunately, up to 35 percent of bottle-fed children in the United States consume soy-based formulas.

Soy and Libido Are Linked 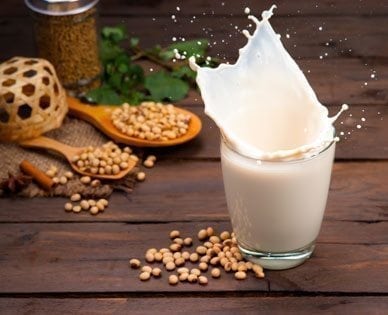 Soybeans contain the chemicals genistein and daidzein, which belong to a class of chemicals known as isoflavones. Genistein and daidzein are also considered phytoestrogens, which means that they very closely mimic the effects of the female sex hormone estrogen. Just two glasses of soy milk every day can be enough to disrupt a woman's menstrual cycle.

The link between soy and libido is bad news for men who drink it. Having a high-soy diet is especially dangerous for men; added estrogen disrupts male hormone balance and can lead to side effects such as breast growth, impotence, emotional lability and low libido. Studies have shown that even lower doses of soy are enough to disrupt hormone balance, so men should use caution when consuming soy products, especially if they already face issues with low libido or other related problems.

The connection between soy and libido is not the only negative sexual health effect caused by soy. In one study, 99 men reported their dietary soy intake and underwent sperm analysis. Men who consumed the most soy had sperm concentration that was about one-third lower. Another study done on rats found that males who were fed phytoestrogens had lower testosterone levels and lower-quality erections.

Products to Choose Instead of Soy