After old age, being female is the second biggest risk factor for developing Alzheimer's disease. In 2017, it was estimated that two-thirds of Americans with Alzheimer's are women. It is not completely clear yet why this disease affects women more than it affects men, but new research sheds light on possible mechanisms.

This new study was conducted at Cornell University in collaboration with University of Arizona Health Sciences, and it was published in the journal PLoS ONe. This study shows that metabolic changes happen during menopause that can influence the development of Alzheimer's.

In this study, the researchers used positron emission tomography imaging to watch how the brains of 43 women metabolized glucose, a type of sugar that is the brain's main energy source. The volunteers represented a wide variety of menopause statuses—premenopausal, menopausal and post-menopausal. The scientists working on this study found that women who were approaching or who had already reached menopause had significantly lower levels of glucose metabolism in their brains, compared to pre-menopausal women.

This low rate of glucose metabolism is dubbed hypometabolism. The researchers also found signs that the mitochondria of the women's brain cells were not functioning optimally. Glucose hypometabolism and mitochondrial dysfunction point toward the menopausal women's brains being inefficient at processing energy. Indeed, the effects of this inefficiency are demonstratable—the menopausal women in the study scored noticeably lower on memory tests than younger women.

The researchers believe that these changes within the brain that take place during menopause are related to the development of Alzheimer's disease. Additionally, the same researchers in previous studies found that menopause is associated with an increase in beta-amyloid protein, which is a biomarker of Alzheimer's.

Some women experience menopause earlier than others, and this can constitute a natural variance. However, women who have to have their ovaries surgically removed before menopause experience a very sudden and premature drop in estrogen. Research shows that "surgical menopause," as this phenomenon is called, is especially bad for women's brain health.

Surgical removal of the ovaries, known as oophorectomy, is often needed when the patient is affected by a disease such as ovarian cancer. This procedure is also sometimes indicated for diseases like breast cancer and severe endometriosis, in which the estrogen produced by the ovaries makes the condition worse. Some women with a very high risk of ovarian cancer may have their ovaries removed as a preventative measure.

One study on this topic was conducted at the Medical College of Georgia at Georgia Regents University and was published in the scientific journal Brain. Researchers investigated the effects of ovary removal on the brains of female rats. Rats who were estrogen-deficient because of ovarian removal experienced greater brain damage after stroke. The scientists also found that rats whose ovaries had been removed and did not receive hormone replacement therapy started producing large quantities of Alzheimer's-related proteins in the brain.

Though this was an animal study, it is likely that these same principles also apply to human women. Those who undergo premature menopause, for whatever reason, and do not receive immediate estrogen therapy may suffer from a two-fold increase in the cognitive decline that can lead to Alzheimer's.

What Exactly is Alzheimer's Disease?

In a normal, healthy brain, neurons are able to process and transmit information efficiently, communicating both among themselves and with other organs in the body. Alzheimer's disrupts this normal neuron communication. In an Alzheimer's-affected brain, many neurons stop functioning and can die completely, affecting many networks within the brain.

When Alzheimer's is first developing, it typically damages parts of the brain involved with memory, such as the hippocampus. Naturally, this causes problems with memory. Later on in the progression of this disease, areas of the brain responsible for language, logic and social behavior are damaged. The further this neurodegenerative condition progresses, the less able the patient is to live and function independently. Though there are medications that can slow the progression of Alzheimer's, no current treatments can actually stop it. The disease eventually kills most people who suffer from it. 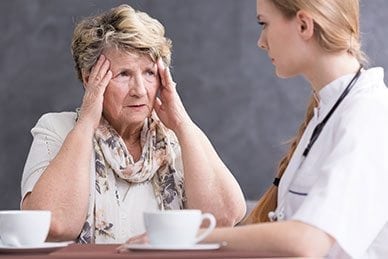 Currently, there are no proven ways to prevent Alzheimer's disease. However, there are a few things that are associated with a decreased risk. It is possible that taking the following steps could reduce your risk:

Because the most recent research has demonstrated a link between low estrogen and Alzheimer's disease, it is possible that maintaining healthy estrogen levels as you get older could help reduce your risk of this condition. Of course, this idea has not been definitively proven yet. To keep your estrogen from dropping too low after menopause, eat plenty of foods that contain phytoestrogens, or plant compounds that act the same way as estrogen in the body. Eat a serving of soy or a serving of flaxseed every day. You can also take a natural supplement that supports estrogen levels, such as maca root, red clover or black cohosh.