Menopause officially begins when a woman has not had a period for one full year, while perimenopause refers to the years leading up to actual menopause. Although the average age of menopause of 51, the symptoms of perimenopause can begin much sooner than that.

Before your period stops entirely, your ovaries start to produce less and less estrogen with each passing year. Sometimes, your body may try to compensate for this lack of estrogen by releasing larger amounts of follicle-stimulating hormone than usual. This can cause you to have high levels of estrogen on some days, and low estrogen on other days.

It's important to note that although pregnancy is virtually impossible after actual menopause has occurred, you can still get pregnant during perimenopause. Anovulatory cycles, which are periods where you bleed but don't actually ovulate, are a characteristic of perimenopause. However, although you may have some cycles where you don't ovulate, other cycles may still include ovulation, creating the possibility of pregnancy. The older a mother is at the age of conception, the higher the chances of miscarriage, pregnancy complications and birth defects such as Down Syndrome. Use effective contraception to avoid pregnancy until you haven't had a period for more than one year.

These symptoms of perimenopause last between five and eight years on average. Fortunately, many if not all of the symptoms are manageable. The vaginal dryness and discomfort during sex can be relieved with personal lubricants, and perhaps with topical estrogen medication if you need it. Hormone replacement therapy, or estrogen pills, is another go-to perimenopause treatment, which you may consider looking into if your symptoms are severe or don't respond to other treatment methods. 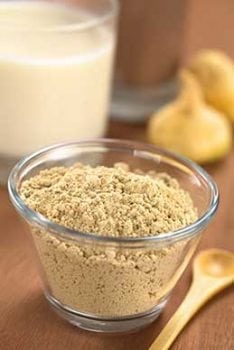 However, although prescription estrogen pills can be very effective, they may carry some health risks. Researchers believe that hormone replacement therapy can slightly increase your risk of certain cancers as well as increase your risk of blood clots. Natural treatment options could give you comparable results to prescription perimenopause treatments while avoiding negative side effects and health risks.

One of the best natural treatments for perimenopause symptoms is maca root. This South American plant has been shown to have a variety of health benefits. Maca's most notable benefits include helping to maintain a healthy mood and an increased libido. Multiple studies have shown that maca root is beneficial for perimenopause symptoms. One study involving 20 women found that taking a maca supplement helped maintain hormone balance while substantially reducing the discomfort associated with menopause. Another study, involving 14 women, found that although in this instance taking a maca supplement didn't affect hormones, it soothed anxiety, boosted mood and was beneficial to sexual health.

Each botanical supplement for perimenopause symptoms works in a slightly different way, so sometimes taking multiple herbs at once or a formula that combines multiple herbs can offer additional benefits. Alongside maca, consider taking evening primrose. One study involving 56 women found that taking evening primrose made hot flashes 39 percent less frequent, 42 percent less severe, and 19 percent shorter. This was a greater effect than placebo. Red clover is another great supplement, and a scientific study involving 60 women found that red clover decreases menopause symptoms. This is believed to be due to the compounds found in red clover, called isoflavones. Finally, taking a supplement that contains ginkgo biloba can help with the "brain fog" that many women experience during perimenopause.

Beyond oral medications, other alternative therapies and lifestyle choices can help you live life to the fullest during perimenopause. Exercise, yoga and acupuncture have all been shown to relieve these types of symptoms. Finally, if you experience hot flashes or night sweats, try to learn whether you have any triggers for this symptom, such as stress, alcohol, caffeine, or spicy food.