A major milestone in a woman's life is reaching menopause, the natural end of a woman's menstrual cycle. Once a woman has not had a period for one year, she is officially considered menopausal. The average age for this milestone is 51, and it marks a period of life full of physical, mental and emotional changes.

Most middle-aged and elderly women would agree that getting older means feeling happier. With advanced age comes increased the self-confidence and emotional maturity that make day-to-day life a lot more pleasant. Around the age of menopause is frequently a time when women find their deepest fulfillment in both their careers and their family life.

However, the physical side of reaching menopause can be unpleasant—for some women much more so than others. The cessation of ovulation, and therefore the menstrual cycle, is essentially caused by rapidly falling estrogen levels. Though the absence of ovulation means no more worries about accidental pregnancy, low estrogen can cause uncomfortable symptoms. 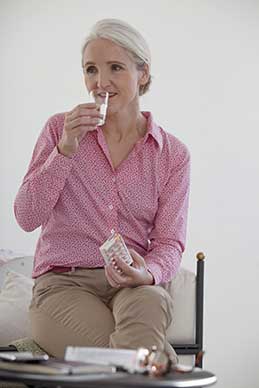 One of the most common menopause symptoms is hot flashes, which are experienced by three out of four women. A hot flash is a period spanning a few minutes where you suddenly feel very overheated. You might sweat or become flushed when this occurs. When hot flashes occur at night, they are called night sweats and may disrupt your sleep. Vaginal atrophy is another annoying effect of menopause. Lack of estrogen causes the vaginal walls to become less elastic and less lubricated, and this can greatly interfere with your enjoyment of sex. Menopausal women can also suffer symptoms such as depression, anxiety, trouble sleeping, lack of energy and headache.

Reaching your 50s entails some other changes besides these short-term menopause symptoms. Of course, you will see signs of aging in your skin and hair, which may both become drier and thinner. Menopausal women are more likely to experience certain health concerns—such as osteoporosis and cardiovascular disease—than when they were younger.

The Dangers of Hormone Replacement: Are They Worth the Benefits?

HRT is an acronym referring to hormone replacement therapy, now commonly referred to as "hormone replacement." This is a type of medication where the female hormones lost during menopause are replenished artificially. Though hormone pills are among the most common method of delivery, sometimes hormone patches or topical creams are used.

HRT is very effective for reducing the burdensome symptoms of menopause. Women who take it usually see notable improvements in their hot flashes, mood, vaginal health and libido. Until recently, HRT was a very routine path of treatment for menopause symptoms. It was once believed that HRT reduced the risk of heart disease, stroke, osteoporosis and other major health conditions. As such, HRT was very commonly prescribed to middle-aged women—not only to relieve hot flashes and the like but as a preventative health measure against serious medical problems.

The tables have turned in light of the most recent research on the dangers of HRT. Large-scale clinical trials have found that using HRT actually increases the risk of:

The longer a woman is on hormone replacement therapy, the greater her risk of these problems.

Hormone replacement therapy is not recommended for most women. In most cases, the risks of the treatment outweigh the positive effects. Exceptions include women with severe menopause, women who already have osteoporosis, women who reached menopause before the age of 40 (premature menopause) and women who suffer from premature ovarian insufficiency. If one of these things describes you, chances are your doctor will recommend taking hormones. Otherwise, you can probably achieve the results you want using herbal medicine and lifestyle adjustments. 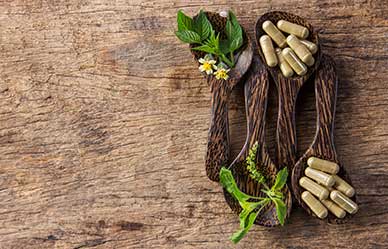 Rather than take estrogen pills, you can see results with natural supplements that don't carry the serious health dangers of HRT. Some great options include maca, ginkgo biloba and damiana. Other herbs used to relieve menopause symptoms include ginseng, evening primrose, red clover and black cohosh. Many of these plants work because they contain chemicals, known as phytoestrogens, that act like estrogen in the body, naturally replacing the real estrogen lost during menopause.

If your main concern is vaginal dryness and lack of elasticity, you can use low-dose vaginal estrogen creams to improve your sexual well-being. These creams will affect your genital tissue without being absorbed into the rest of your body. Vaginal lubricants and moisturizers can also be of great help.

General menopause symptoms can be greatly improved through adopting a healthy lifestyle. Here are some easy ways to boost your energy, banish hot flashes and improve your mood:

Medical professionals once believed that hormone replacement therapy could reduce your risk of several serious medical problems. Though we now know that HRT will not produce these benefits, there are other ways to reduce your risk. Following the lifestyle guidelines above will drastically cut your risk of cardiovascular disease and stroke. Regular strength training, calcium, and vitamin D will reduce your risk of osteoporosis.