Birth control pills have been available to the public for contraceptive use since 1960. As the years pass, more information about this class of medications continues to be revealed, including a newly-discovered link between birth control and depression. Although in the past, doctors refused to prescribe birth control pills to non-married women, the pills are now immensely popular among women and girls of all ages and walks of life. Among women in their childbearing years who use a form of contraception, more than one-quarter of these women opt for birth control pills.

The popularity of birth control pills should come as no surprise. Not only are they 99.9 percent effective at preventing pregnancy, but they also offer other benefits. One survey found that over half of those who take contraceptive pills take them for other reasons in addition to contraception. "The Pill" is used to prevent menstrual migraines, alleviate severe period cramps, treat acne, treat polycystic ovary syndrome and regulate the menstrual cycle. Birth control pills are even associated with a decreased risk of ovarian cancer.

However, as wonderful as birth control pills may be for many women, others experience unpleasant side effects. These can include weight gain, light bleeding in between periods, headache, decreased libido, mood swings, breast tenderness and even changes in vision for those who wear contact lenses. Taking birth control pills can elevate your risk of blood clots and stroke, especially if you smoke. There is even a small but controversial link between taking birth control pills and a slightly elevated risk of breast cancer.

New Study Confirms a Link Between Birth Control and Depression 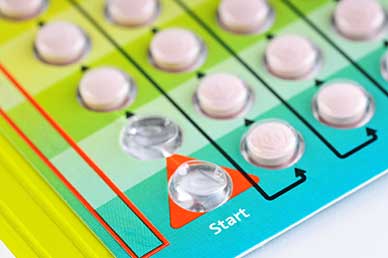 This study, published in the journal JAMA Psychiatry, analyzed data from over one million women and teenage girls from Denmark. The data collected was from a span of over 14 years. Analysis found that those who used a hormonal birth control method had a 40 percent higher risk of developing depression after six months compared to women who didn't use a hormonal method. Furthermore, women who took oral birth control pills in particular had up to a 30 percent higher chance of taking antidepressant medications, compared to those who didn't use hormonal birth control. The increased risk of depression seems to affect teenage girls more severely than it does adult women.

If you don't have the healthcare coverage for the above contraception methods, or aren't ready to commit to a permanent or semi-permanent birth control method, there are still many options. The diaphragm, a cap placed over the cervix before sex, has an effectiveness rate of 88 percent on average, which is comparable to the birth control pill's average actual effectiveness of 91 percent (although the pill is 99.9 percent effective when used perfectly, not everyone does use it perfectly, so the actual effectiveness is lower). For women who have never given birth, the vaginal sponge is also a very effective option with 88 percent effectiveness. Male and female condoms are slightly less effective than the diaphragm or the sponge. Less-reliable birth control methods include fertility awareness and spermicide.

Weigh the pros and cons of each method to find the birth control method that suits your lifestyle, your relationship and your budget.