How Issues in Your Relationship Can Affect Libido

Low libido does not always have a physical cause. In fact, specific relationship problems can significantly impact your sex drive. Here, we examine the ways in which your relationship can affect libido and the steps that can be taken to address and ultimately resolve any issues that may be dragging down your (or your partner's) sex drive.

A Look at Common Concerns

Lack Of Connection With A Sexual Partner

There are many reasons why one partner may lose interest in the other. Issues can be physical and emotional. In some instances, loss of interest may be due to changes in physical appearance. On other occasions, spouses or significant others drift apart and have nothing to talk about or lack similar interests. Regardless of what the specific connection-limiting factors are, such circumstances can bring about a loss of libido.

One partner might be able to overcome the other's physical decline by encouraging them to take better care of themselves and reignite the notion of having pride in their appearance. Such a task could be accomplished by both partners taking exercise classes together, engaging in sports or subscribing to a healthier, more nutritious diet.

When couples have lost that special connection, rekindling those emotions could hinge on being able to reconnect as people. This goal might be met by making an attempt to get to know one another again. Devote time each day or each week to going out to eat, partaking in activities both parties enjoy or just talking. The more time partners spend together could lead to their rediscovering and identifying the attributes that initially attracted one partner to the other.

Sometimes, tension between sexual partners develop over underlying issues that precipitate conflict or difficulty. Such problems include financial struggles, family tension or disagreements about certain life circumstances. Anger or tension could result in one partner developing a diminished sex drive. Couples might overcome this problem by identifying the tension-causing issues and coming up with constructive solutions.

Diminished libido could be precipitated by a spouse or significant other not communicating their sexual needs to the other. Communication and understanding are important to every endeavor, especially sex. Most sexual partners are not mind readers. If one partner has specific desires that are not being met, said individual must make those feelings known to their lover.

Discussing such yearnings prior to a sexual encounter might prove beneficial. Voicing one's displeasure with their partner's performance or emotional detachment during or immediately after sex is the recipe for conflict. Effective communication would entail taking the time to discuss such issues under calmer, less emotional circumstances. It is always better to get feelings out into the open and give the partner in question time to process those emotions.

People may find kindling intimacy with partners they deem untrustworthy difficult. One of the biggest violations of trust in a sexual relationship is infidelity. Those who have been cheated on might not find their spouse or significant other sexually or physically attractive after an extramarital affair. 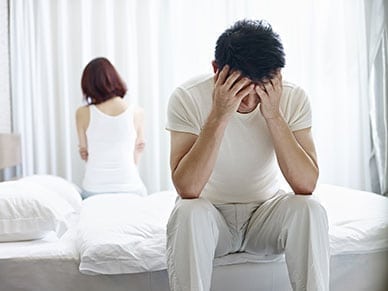 Putting one's trust back into someone who broke it is never easy. The first step to recovering a damaged sexual relationship is to forgive the guilty party for their misbehavoir. If the victimized partner is able to forgive, an emotional connection and intimacy might be rebuilt slowly.

Both men and women might experience sexual performance issues. Such circumstances might be caused by a variety of biological, physical and emotional issues. Sexual performance-debilitating factors include erectile dysfunction or vaginal irritation or infection, excessive consumption of alcohol, medications and fatigue. Unfortunately, performance-inhibiting problems present in one partner can greatly reduce the sex drive of the other.

Identifying a performance issue's underlying cause is often the first step to rekindling a healthy sex life. That said, some of these issues might require medical or psychological intervention.

Increased tension, added professional pressures or, in the case of women, becoming mothers precipitate tremendous burdens on their time and energy that sexual intimacy becomes unimportant. That said, the impacted individual's disinterest in sex might precipitate diminished libido in their partner.

Such circumstances may be overcome by allocating time for the partners to spend together away from their job, children or other responsibilities.

While any of the preceding issues might cause a diminished sex drive in their spouses or significant others, it is important to note that low libido may also be precipitated by a variety of medical conditions and life events.

As men and women age, their bodily concentrations of specific sexual and reproductive hormones decline. This is especially true for women who undergo a natural life stage called menopause during middle age. Declining amounts of body chemicals like testosterone, estrogen and progesterone often produce diminished libido.

In addition, a decreased sex drive could be a manifestation of other potentially serious illnesses like diabetes and certain kinds of cancer. Any cases of low libido that drag on or are accompanied by other symptoms should be brought to the attention of a physician. Said professional could perform a thorough physical examination, identify the specific cause and initiate the most effective treatment options.