Estrogen and Migraines: New Research Pinpoints Hormone Imbalance as Cause

In this article, we will examine the painful, sometimes life-altering condition known as migraines, the link between estrogen and migraines and the therapeutic steps those stricken with the ailment can employ in an attempt to alleviate discomfort.

Migraines are considered neurological disorders that precipitates numerous alarming, if not disabling physical manifestations of which severe pulsating headaches are often the most prominent. The ailment does, however, often elicit several other symptoms such as sensitivity to light, dizziness, nausea, vomiting and speech and vision disturbances.

Migraines are also often preceded by early stages known as prodrome and aura. Each stage precipitates its own unique set of symptoms that might alert a migraine sufferer that an attack is imminent.

Though scientists cannot pinpoint one exact cause of migraines, many opine that hormones play a significant role in their occurrence. Therefore, individuals afflicted with any health issue that affects systemic hormonal concentrations could have an increased risk of developing migraines.

Hormonal imbalances can be elicited by a host of different illnesses. In many instances, these medical concerns are directly attributable to disorders of various glands and organs that produce sexual, reproductive and metabolic hormones such as the thyroid, pituitary, adrenal glands, testes and ovaries. That said, serious, potentially life-threatening illnesses like cancer and diabetes could also elicit migraines.

The Connection Between Estrogen And Migraines

Of all hormones, estrogen seems to be one of the biggest culprits in the genesis of migraines. A diminished bodily concentration of estrogen can result in the condition. Scientific research has also concluded that women are three times more likely to be stricken with migraines than men. This biological phenomenon is thought to occur for several different reasons. One research study recently concluded that estrogen plays an integral part in sensitizing key nerves and brain cells believed to be responsible for precipitating migraines.

Estrogen also executes an important role in several biological processes a woman will experience during her lifetime. One such process is menstruation. During the later stages of the ovulation period, estrogen levels drop precipitously. Ergo, women are more likely to experience migraine symptoms when they are having their periods. Another potential migraine trigger is menopause. During menopause, the ovaries gradually decrease production of vital sexual and reproductive hormones, most notably estrogen. Eventually, little, if any estrogen is still produced. Such circumstances could precipitate the occurrence of migraines on a longer and wider scale for impacted women.

What Remedial Efforts Can Be Employed? 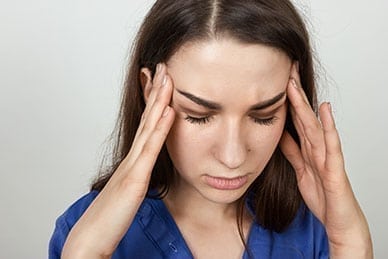 Prior to initiating any therapeutic protocol, the exact cause of migraines must be identified. Diagnosing migraines is not always a cut-and-dried process for many health professionals and often requires a thorough physical examination and might necessitate numerous diagnostic tests to draw any ultimate conclusions. It is also important to note that migraines are not curable and any remedial effort might also hinge on the severity of the underlying condition, the patient's age, general health and tolerance to specific treatments. That said, there are a number of remedial options migraine sufferers can explore that might offer relief including:

Individuals who experience mild migraine pain might benefit from over-the-counter painkillers such as acetaminophen, ibuprofen and naproxen. However, in many cases, migraine discomfort in more severe and may necessitate the use of a prescription drug. That said, prescription medications might cause bothersome side effects.

This remedial effort enables the bodies of migraine sufferers to receive transmissions of electrical impulses that travel to their brains through a small mechanical device.

Some afflicted persons may find relief by employing alternative techniques such as acupuncture, massage therapy and biofeedback, which teaches practitioners to better control their responses to stress and other potential migraine stimuli.

Certain individuals, especially those for whom migraines are a frequent occurrence, are placed on a preventative therapy regiment. Preventative therapy often involves the use of prescription drugs and the specific preparations those subscribing to this therapeutic protocol might be prescribed include cardiovascular medications, anti-seizure drugs, antidepressants and Botox.

Some individuals stricken with migraines employ the use of various natural treatments to address the physical manifestations of their condition such as: