New Connections Between Migraines and Menopause

Women have always reported a link between migraines and menopause, and a recent study finally proves that there is a connection.

What Happens During Menopause?

Menopause officially begins when a woman has not had a menstrual period for more than one year. Perimenopause is the time leading up to menopause and is characterized by irregular and less-frequent periods. During both menopause and perimenopause, women can experience a variety of symptoms including hot flashes, night sweats, insomnia, mood swings, depression, anxiety, irritability, weight gain, low libido, thinning hair and vaginal dryness. Another common symptom that women report is an increased frequency of migraines. However, only recently has there been a study empirically proving that women tend to get more migraines during menopause.

The Link Between Migraines and Menopause

A migraine is a severe headache, often involving a throbbing or pulsing sensation in the head, nausea or vomiting and sensitivity to light and sound. Occasionally, migraines can even be accompanied by symptoms like flashes of light, tingling in the limbs and blind spots. Migraine attacks can last hours or days, and can be caused or made worse by factors such as certain foods and food additives, alcohol, caffeine, stress, sleep cycle disruption, hunger, fatigue and some medications. Women suffer from migraine headaches three times more often than men, due to the often unpredictable fluctuations of female hormones. 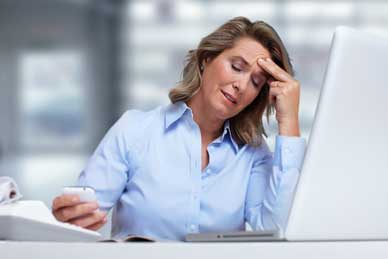 Researchers from the University of Cincinnati, Montefiore Headache Center, Albert Einstein College of Medicine and Vedanta Research have recently published a study on the link between migraines and menopause in the scientific journal Headache: The Journal of Head and Face Pain. The study showed that women going through perimenopause were 60 percent more likely to experience high-frequency headaches as compared to women who still had a normal menstrual cycle. For the purpose of this study, high-frequency headache is defined as more than 10 headache days per month.

Balances of the female hormones estrogen and progesterone are disrupted during perimenopause, and this disruption is believed to be the culprit of the relationship between migraines and menopause. Women were most likely to suffer from migraines during the later stages of perimenopause, which is characterized by low estrogen levels.

Though migraines and menopause go hand-in-hand, just because you're getting older doesn't mean you have to put up with constant headaches. Take care of your health by relieving emotional and physical stress, exercising regularly, not smoking and keeping a regular sleep schedule. These simple steps can be enough to reduce your risk of migraines. If you find that your migraines are caused or made worse by certain foods, alcohol, bright lights, a medication, or anything else, avoid being exposed to your migraine triggers.