Cell Phones and Erectile Dysfunction: Could Staying Connected Cause Impotence?

In cases with a physical cause, there is a problem with the circulatory system causing the penis to not receive the blood it needs to become erect. In the case of a psychological cause, an issue such as anxiety or depression prevents arousal, a situation which can ultimately lead to low libido. Other risk factors for erectile dysfunction include diabetes, tobacco use, heart disease, obesity, injury, alcohol use and medications. According to new research, cell phones and erectile dysfunction could also possibly be linked.

The Rising Popularity of Cell Phones

The mobile phone was first made commercially available in 1983. In the three decades since then, cell phones have grown in popularity to the point that approximately 90 percent of adult Americans own one.

Although cell phones certainly make life much more convenient, they can lead to unwanted side effects. Among these side effects are psychological effects such as internet and social media addiction. Physical side effects are also possible, however, further research is needed. The National Cancer Institute states that the type of radiation that cell phones emit is not the type of radiation that causes cancer. While it is true that cell phones have not been proven to cause cancer or any other physical health effects, the World Health Organization still classifies cell phone radiation as "possibly carcinogenic to humans." Until further research takes place, the possible dangers of cell phone radiation cannot be ruled out.

The Link Between Cell Phones and Erectile Dysfunction 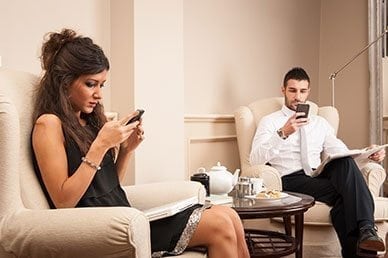 In a small study done by Cairo University in Egypt along with the Medical University of Graz in Austria, a link was found between cell phones and erectile dysfunction. The study, published in the Central European Journal of Urology, looked at a group of 20 men over a period of six months. The men answered questionnaires about their cell phone usage and their erectile problems.

In the end, researchers found that carrying your cell phone switched-on in your pocket increases your risk of developing erectile dysfunction. Age, body type and testosterone levels of participants were essentially the same across the board, eliminating the possibility that these factors contributed to the risk of becoming impotent. It is interesting to note that actual time spent talking on the cell phone did not matter in relation to erectile dysfunction; carrying the phone around when it was switched on for long periods of time was what made the difference.

Does This Mean That Cell Phones Cause Erectile Dysfunction?

Cell phones and erectile dysfunction may be linked, but the exact nature of the connection is still unclear. Although this study is a start, the sample size of just a couple dozen men is also too small to conclusively determine a meaningful link.

Anxiety is also a common cause of erectile dysfunction, with the stress of worry preventing arousal from happening. The link between excessive cell phone use and impotence may actually be due to the fact that both things are caused by a different common factor. Nevertheless, until further research takes place, this particular relationship between sexual health and technology remains unclear.