Menopause refers to the variety of physical, psychological and hormonal changes that take place when a woman stops menstruating, usually after the age of 40. Although not all women experience noticeable symptoms, some women experience symptoms unpleasant enough to warrant treatment. These symptoms can include:

The traditional treatment for severe menopause symptoms is usually hormone replacement therapy, as a woman's body stops producing estrogen after menopause. However, hormone replacement therapy has been linked to an increased risk of certain cancers, as well as stroke. Researchers are looking into effective alternative therapies for menopause that don't carry these risks. One such alternative therapy that shows promise is yoga.

Yoga refers to a wide variety of philosophies and disciplines originating in India as far back as the sixth century BCE. However, the term "yoga" as it is used in the West generally refers specifically to Hatha yoga, a discipline combining physical postures, breathing and meditation. 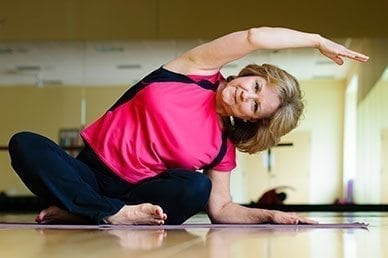 Various studies have proven the health benefits of Hatha yoga. Practicing yoga has been shown to improve cognitive functions including memory, concentration and attention. Yoga has been demonstrated to optimize sleep patterns, decreasing the severity of insomnia and other sleep disorders. Certain yoga poses can even reduce chronic lower back pain. The balancing and relaxing effects of yoga make it a great option for menopausal women looking to relieve their symptoms naturally.

One notable study looking at yoga for menopause symptoms followed 88 menopausal women for 12 weeks. These women were separated into three groups, doing either yoga, exercise, or nothing (the control group). The women answered various questionnaires and had their hormone levels examined to determine their progress. After the twelve weeks were over, the women who practiced yoga had lower symptoms, lower stress levels, lower depression levels and an overall better quality of life. These improvements were better than those seen in both the exercise and the control groups. Another study found that yoga reduces hot flashes by 31 percent.

When done correctly and safely, yoga poses should carry very little risk of injury to your body. The breathing and meditative aspects of yoga carry no negative side effects. Although yoga is very effective, it still seems to be safer than treating menopause symptoms with hormones, the far-reaching effects of which are not completely researched. Yoga for menopause symptoms is an overlooked therapy that deserves more attention.

Beginning a regular yoga practice could be an excellent first step in managing your menopause symptoms. Of course, you can amplify the benefits of yoga therapy by living a healthy lifestyle. Eating a healthy, balanced diet will help you replace the energy that you can lose during menopause. Avoiding smoking reduces your risk of hot flashes. Although yoga alone is more effective than exercise alone in treating menopause symptoms, this doesn't mean you should give up on exercise. Physical exercise will keep your heart healthy and strengthen your muscles and bones, which would otherwise weaken as you age.

Some natural herbs can also relieve menopause symptoms. For hot flashes and other physical symptoms, you could try black cohosh, dong quai, valerian root, or wild yam. St. John's wort, valerian root, saffron, and maca can be effective for mood swings, depression and other psychological effects of menopause. If you feel that menopause is compromising your memory or attention, you may find that ginseng, guarana, gingko biloba, or green tea helps to counteract this. When used in conjunction with yoga practice and good lifestyle habits, these supplements can be especially effective in relieving menopause symptoms.