A scientific analysis of over 6,000 women has determined that menopausal women who don't exercise experience greater menopause-related discomfort than those who do.

A woman has officially reached menopause when she hasn't had a period for over a year. Menstruation ceases because the ovaries stop producing the hormones estrogen and progesterone. The average age for this to occur is 51. The time period leading up to menopause is called perimenopause, and both menopause and perimenopause can cause unpleasant symptoms including hot flashes, night sweats, insomnia, urinary incontinence, vaginal dryness, mood changes, low libido, weight gain, joint pain and osteoporosis.

A study involving more than 6,000 middle-aged women in 11 Latin American countries found that menopausal women who don't exercise have it worse than those who remain active. This study is published in the scientific journal Menopause. The women in the study completed standardized questionnaires asking about their exercise habits, menopause discomfort and other aspects of health. In this study, being sedentary was defined as having fewer than three weekly exercise sessions lasting at least 30 minutes. 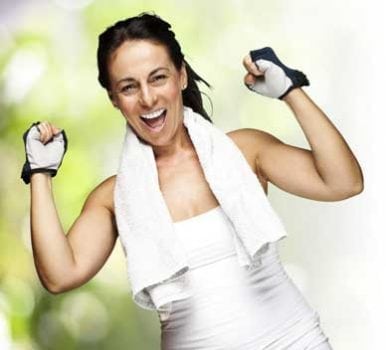 In addition, exercise boosts your mood instantly due to the endorphins that flood your body. It also improves your baseline energy levels due to the improved blood flow, providing every cell in your body with more of the oxygen and nutrients that it needs for energy. Breaking a sweat has been proven to be as or more effective than antidepressants for mild-to-moderate depression, and there's a good chance a morning jog will wake you up more quickly than a cup of coffee. Those who exercise also have better immune systems than those who don't, so they get sick less often.

Ways to Be More Active

Even exercising a little bit more than you currently do will make you healthier. In fact, one study showed that just walking three miles per day reduced the risk of obesity by 24 percent. However, implementing a comprehensive exercise routine can be a daunting task, especially for those who have never been in the habit of exercising regularly. It's easy to be intimidated... where will you find the time? With a little creativity, you can squeeze exercise into your schedule and still have plenty of time left over. For example:

Related Articles:
Avoid Hormone Imbalance With Exercise
How to Boost Energy Naturally Without Sugar or Caffeine
Dealing With Painful Sex During Menopause