Warning: Long-Term Use of Ibuprofen Can Cause Low Libido

Non-steroidal anti-inflammatory drugs, or NSAIDs, are a very common type of painkiller. Many NSAIDs are sold over-the-counter, such as aspirin, naproxen and ibuprofen. These medications are used by millions of people. Because they are often effective, and because they are easy to access and affordable, many people suffering chronic pain take NSAIDs on a daily basis. However, research is shedding light on the negative effects of daily NSAID use.

Past research suggested a possible link between erectile dysfunction and inflammation in the body. The researchers in charge of one large study thought that perhaps the use of these anti-inflammatory drugs would reduce the incidence of this condition. Instead, this study actually found that taking NSAIDs on a daily basis increased the likelihood of erectile dysfunction in men. The participants were men aged 45 to 69. Those who did not take NSAIDs had a 24 percent rate of erectile dysfunction, whereas 35.2 percent of men who took them regularly suffered from the condition.

The authors of this study adjusted for factors such as age, race, ethnicity, smoking, body mass index and various diseases. However, despite these adjustments, more questions still remain. For example, are the results of this study simply because NSAID use is an indication of some other problem that leads to ED? The researchers point out that this study does not constitute hard evidence of a cause-and-effect relationship.

More Evidence Surfaces that Ibuprofen Can Cause Low Libido 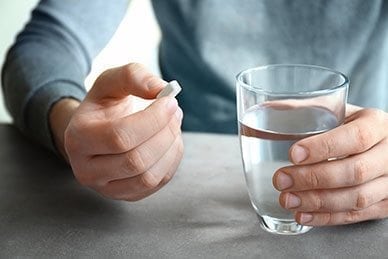 Although the study described above did not definitively prove that NSAID use causes erectile dysfunction, other studies support the idea. In a Danish study, 31 male participant aged 18 to 35 were instructed to take 1200 milligrams of ibuprofen daily for six weeks. Many of the men developed hypogonadism as a result of NSAIDs.

Hypogonadism is a condition where the body does not produce sufficient sex hormones such as testosterone. Hypogonadism is much more common in elderly men, and this hormone imbalance can lead to infertility, reduced libido, reduced muscle mass, fatigue, depression loss of body hair and even development of breast tissue. The men in this study experienced the symptoms of hypogonadism even just two weeks into the study. Fortunately, the effects faded away after ibuprofen use ceased.

This study was published in Proceedings of the National Academy of Science. The authors of the study note that until now, most warnings regarding long-term NSAID usage were focused on the possibility of gastrointestinal, kidney and heart side effects in elderly people. However, the findings of this study raise new questions about just how appropriate NSAID medications are for long-term pain management. People suffering from arthritis and exercise-related soreness are among the most likely to use an NSAID every day. With the sperm counts of Western men having declined 52 percent in the last 40 years, the risk of hypogonadism and therefore even further decreased fertility poses a major public health concern.

The evidence is stacking up that ibuprofen can cause low libido. The 1200 milligram daily dosage provided to the volunteers is well within the recommended dosage found on ibuprofen bottles, so even everyday amounts of NSAIDs can cause adverse effects. In particular, men who already have preexisting reproductive health problems should definitely avoid using this class of drug. Occasional use of ibuprofen or any other NSAID will not harm your sexual health.

Other Medications that Can Affect Your Sex Life 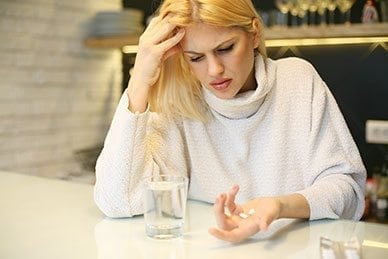 Far beyond these common over-the-counter pain relievers, many other medications are also known to cause adverse sexual health effects. Another medications that can also contribute to hypogonadism in men is finasteride. It is commonly prescribed to treat enlarged prostate, which is experienced by a majority of aging men. Finasteride is also prescribed in lower doses for baldness, especially premature baldness. An alternative to finasteride for hair loss is Rogaine, a topical treatment with no sexual side effects.

There are a myriad of non-gender specific medications that can affect sexual function for both men and women: take, for example, antidepressants. Both SSRI and tricyclic antidepressants are notorious for reducing sexual function, especially sexual sensation and the ability to reach orgasm. If you think your depression medication is interfering with your sex life, talk to your doctor about the possibility of lowering your dose or switching to a different antidepressant. One atypical antidepressant, bupropion, is famous for being one of the only antidepressants to carry no sexual side effects.

Other types of medications that can put a damper on your sexual function include antihistamines, anti-seizure medications, opioid painkillers and beta blockers. If you're taking any of the medications in this article, or even a medication not listed here, and you think it could be harming your sexual health, consult your doctor. Remember, do not cease taking a medication without medical approval.