A study done in the United Kingdom has determined that reducing sugar in sweetened drinks by just 40 percent could have an impressive impact on public health.

The Connections Between Sugar, Diabetes and Obesity

30 percent of people worldwide are overweight or obese, a statistic that has more than doubled since 1960. Added sugar is a huge culprit behind this epidemic. More and more sugar is added to food products with each passing decade to keep up with peoples' growing addiction to sweetness. Sugar provides very little satiety or nutrients for the amount of calories it contains. For example, a serving of Coca Cola contains 39 grams of sugar, or 140 calories' worth. Yet, drinking a can of Coke will not fill you up at all, leading you to consume more calories than you need.

Type II diabetes is also a growing epidemic. This disease occurs when the pancreas doesn't produce enough insulin, or if the cells of the body become resistant to insulin. 29.1 million people in the U.S. alone have diabetes, and type II diabetes accounts for up to 95 percent of these cases. The number one risk factor for developing diabetes is being overweight or obese; in fact, being overweight makes you up to 40 times more likely to develop the disease.

The average adult consumes 287 calories daily from added sugar. The trend of added sugar is definitely one of the leading factors behind most cases of type II diabetes, an easily-preventable illness. 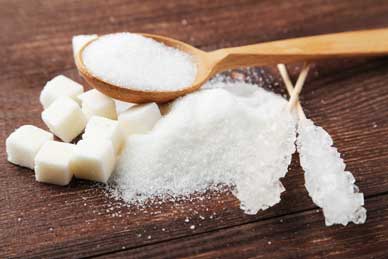 Staggering amounts of sugar are added to all varieties of food and drink. In recent years, heavily-sugared beverages have become more and more popular worldwide, contributing to the global obesity epidemic. These beverages include fruit juices, juice-based drinks, sodas, teas, energy drinks and more. So many people consume these beverages on a daily basis, that reducing the sugar in sweet drinks by just 40 percent would prevent 1.5 million cases of overweight or obesity and 300,000 cases of type II diabetes in the United Kingdom alone.

These numbers were determined by researchers at Queen Mary University in London. The study was inspired by the United Kingdom's recent measures to reduce excess sodium intake. Food manufacturers successfully reduced added salt by 40 percent over five years, producing health benefits for the population and now they plan on reducing sugar in much the same way.

The authors of the study produced the figures by calculating the average consumption of sugary beverages, and then estimating the average reduction of calories each adult would experience if they consumed 40 percent less sugar from those beverages. Over five years, this reduction would lead to a loss of about three pounds per person. This may not sound like a lot, but actually makes a huge difference. Just three pounds can be the difference between a normal BMI and an unhealthy BMI.

The more sugar your taste buds get bombarded with regularly, the more sugar you have to consume in order to experience the same pleasure. Researchers note that because this strategy is to be implemented gradually over the course of five years, consumers are unlikely to be upset or even to notice that their drinks are less sweet. It's also unlikely to affect the soft drink industry's profit.

Other Steps to Take

Ideally, individuals would reduce their consumption of sugary drinks as a lifestyle change. However, due to individual habits, lack of education on healthy diet and the powers of marketing and advertising, it is very unlikely that people will choose to consume less sugar of their own prerogative, which is why U.K. officials have decided to go an easier route by reducing sugar at the manufacturing level.

However, there are many steps that individuals can take to gain control over their health. The U.S. government recommends getting 150 minutes of moderate exercise per week. Diet is a much easier aspect of your life to improve than many people think. By eating nutritious, wholesome foods in reasonable portions and reducing sugar intake, you can greatly reduce your risk of disease and improve your quality of life.