In today's fast-paced world, millions of people struggle to juggle the competing demands of personal life and career each day. The result? We are becoming increasingly exhausted and low on energy. Whether we're dealing with flat out fatigue or a general lack of energy and feeling of tiredness, the common antidote is loading up on sugar and/or caffeine just to get through the day. Low energy hurts our health in many ways, and can also contribute to larger problems like anxiety, depression and low libido.

What Causes Diminished Energy In Men?

Low energy is one of the most common health issues faced by men today. This condition could range in severity from mild tiredness to extreme fatigue that can interfere with a man's ability to perform his daily functions. A significant decline in energy that persists for longer than a week or two may, in certain instances, be the manifestation of a serious health problem like cancer, damage or disease to a major organ or a significant chronic illness such as diabetes. In many cases, however, increased incidents of low energy in men are often caused by more common, yet treatable conditions like hormonal imbalances (especially diminished concentrations of testosterone), disrupted sleep patterns, mental concerns like anxiety and depression and nutritional deficiencies. 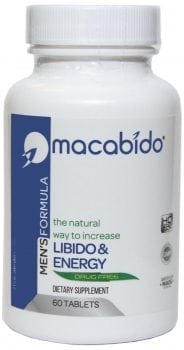 Fortunately, men experiencing low energy who use Macabido can benefit from numerous ingredients that possess their own natural energy boosting properties. These include:

Maca is the primary ingredient in Macabido Men's Formula. This plant, categorized by Botanists as Lepidium myenii, grows in the Peruvian Andes Mountains and has been cultivated there for centuries. Maca root is harvested, dried and turned into a powdery substance that is used for public consumption, both as a food and as a medicine.

Maca has been scientifically proven to increase energy in men. One specific study examined the impact taking maca had on bicycle racers. Researchers concluded that those athletes who used maca for as little as two weeks were able to complete specific competitions at quicker paces. In addition, many scientists also believe that maca greatly contributes to muscle and bone growth in men. A stronger, more impressive physique can result in greater levels of stamina and energy.

Ginseng refers to a family of plants that grow primarily in Asia, and whose history date back to the ancient Chinese culture which used its extracts for nutritional and medicinal purposes. In modern times, the substance can be found in a wide array of products, most notably tea, and is still believed to possess numerous healing qualities.

A 2013 study concluded that Ginseng can be a powerful tool in battling unexplained chronic fatigue. Scientists examined roughly 100 subjects ranging in age from 20 to 65. Those administered high dosages of Ginseng reported experiencing a precipitous decrease in the severity of the fatigue they had previously been stricken with.

Gingko Biloba is considered to be the oldest recorded species of tree in world history. For centuries, leaf extracts from this tree native to Asia have been employed to treat many different health issues. Ginkgo is thought to be particularly beneficial in boosting energy in men because of its ability to stimulate the body's creation of a substance called adenosine triphosphate (ATP). ATP provides energy to the body's cells and can result in improved organ function and overall general health.

L-arginine is an amino acid that helps the body form proteins. Protein is vital to the energy generation and maintenance processes. In addition, this substance supports healthy circulation which helps keep the body's cells, tissues and organs nourished and healthy.

Niacin, also known as Vitamin B3, is noted for promoting healthy blood circulation. However, this substance also plays a crucial role in aiding the body in breaking down glucose into the energy it needs to function properly.