What is Ginkgo Biloba?

Ginkgo biloba, commonly known as ginkgo, is a deciduous tree native to China that can live for thousands of years. The ginkgo tree, also called the maidenhair tree, is actually a living fossil. Its closest relatives are plants that lived around 270 million years ago, which we only know about through the fossil record. Ginkgo has been used as a medicine to increase energy and libido and as a food for some 5000 years, but it has only been cultivated for its healing properties in North America and Europe for the past few hundred years. While the fruit and nuts of the ginkgo tree are used as a food in Asia, its fan-shaped leaves are the part most commonly used for healing.

What Does Ginkgo Do?

Ginkgo leaves are very rich in flavonoids like kaempferol glycoside, quercetin glycoside, ginkgolides, and bilobalide are the constituents primarily responsible for its great reputation as a plant medicine. Ginkgo also possesses amazing broad-spectrum antioxidant properties, making it a valuable herb for supporting overall healthy aging and also for maintaining the health of many important body systems. Ginkgo leaf is possibly most popular for its ability to support healthy blood flow and maintain strong blood vessel walls, which is why its often used to promote a healthy cardiovascular system and increase energy.  Specifically, ginkgo promotes healthy blood flow to the brain, thus its reputation in relation to supporting healthy cognitive function.

Ginkgo also possesses qualities that support healthy neuron functioning, and is sometimes referred to as a “memory phytomedicine."  Along these lines, it is often given to women who suffer from menopausal forgetfulness to help maintain healthy cognitive function. Ginkgo can also help increase energy, as it supports the cells’ healthy production of adenosine triphosphate (ATP), the body’s cellular fuel, while also supporting the body's use of glucose for energy. Additionally, because of its libido-boosting properties, ginkgo can be helpful in the bedroom. The Journal of Sex Education and Therapy reported that ginkgo extract can help support healthy male sexual performance. In fact, ginkgo has a beneficial effect on each of the four phases of the sexual cycle: desire, arousal, orgasm, and relaxation. 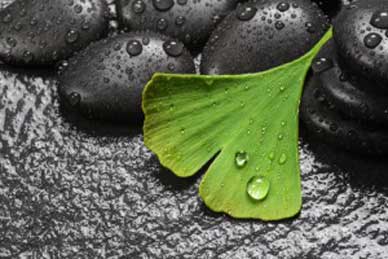 Ginkgo biloba is a fairly well-studied herb, with clinical trials focusing on everything from cognitive function and memory to cardiovascular and eye health. In European trials, ginkgo has been shown to help improve memory in the aging. Other studies show that ginkgo’s effect on the brain’s alpha waves might enhance brain activity, improving mental functioning, concentration and memory.

Ginkgo has also shown promise in maintaining a healthy mood in the elderly and may help soothe anxiety. A few studies hint that ginkgo’s antioxidant properties and high flavonoid content might help maintain healthy eyes, and even protect against further damage to the eye tissue in people with concerns like cataracts and glaucoma; however, further research is needed in this area. Gingko’s cardiovascular-supportive properties have given it a reputation as a great herb for protecting heart health, helping to maintain blood vessel integrity and healthy blood flow, both of which increase energy and contribute to overall cardiovascular health.

Studies have also shown that ginkgo’s ability to relax the blood vessels and support healthy blood flow might result in better sexual health and performance. In a study of men taking antidepressant drugs who were also experiencing sexual issues, ginkgo was shown to help improve sexual function after four to six weeks in up to 76 percent of the men in the study. Gingko also improved sexual desire (libido) and orgasms in the men who suffered from sexual issues due to antidepressant use.

How Can You Use Ginkgo?

Although there is no standard dose for ginkgo, the usual recommended daily intake ranges between 120-240 mg, divided into two or three doses, although some people may take as much as 600 mg daily. Always follow the manufacturer's instruction when taking a ginkgo supplement. Ginkgo can be taken in many forms, including tincture and capsule. However, most studies are based on a liquid extract of ginkgo biloba that has been standardized to 24 percent flavone glycosides and six percent terpene lactones. For the best results, the liquid extract is usually your best bet, since it’s one of the more potent delivery methods.

When taking ginkgo biloba, many experts recommend starting at the lower end of the dosage spectrum and building up over time in order to avoid gastrointestinal discomfort. Ginkgo should not be used without consulting a physician if you have a blood circulation disorders or are taking blood thinners or antidepressants. If you are pregnant or breastfeeding, it is also recommended that you consult your physician before taking ginkgo biloba.