Birth control in its modern sense is a concept that's only arisen within the past 100 years. Contraception in any form was not made legal in the United States until 1938. The female birth control pill was developed throughout the 1950s and 1960s and was made commercially available to married couples only in 1965. It took another seven years for the Supreme Court to rule that anyone could use the birth control pill, regardless of marital status.

The legality and availability of contraception, specifically the female birth control pill, has made a huge impact on women's lives. The birth control pill affords women much more freedom than they have had in centuries past, giving them full personal control over whether they conceive a child. Having access to reliable contraception has helped millions of women to stay at work and continue to make a living, and in many cases, even stay out of poverty.

Why Isn't There a Male Birth Control Pill on the Market?

Men have not had access to semi-permanent contraception like women have. For men, there are only very temporary options, such as condoms, or very permanent options like sterilization. However, there are understandable reasons why there is no commercially-available male birth control pill thus far.

A male contraception method similar to the female birth control pill has been conceptualized as far back as the 1950s, but it has not been fully developed due to many factors. Roadblocks have included the desire to maintain the contraceptive status quo, scientific challenges and the apathy of pharmaceutical companies. Furthermore, each formula that has been tested over the decades has proved to inflict severe side effects, such as loss of libido and erectile dysfunction. Many of these formulas have also not been effective for all men. However, scientists are getting pretty close to creating an effective, yet tolerable, semi-permanent male birth control, as illustrated by a recent study. 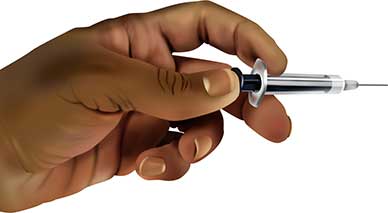 The study in question was published in the Journal of Clinical Endocrinology and Metabolism and was co-sponsored by the United Nations. The purpose of the study was to determine the effectiveness and safety of a male hormonal contraceptive shot in 320 volunteers. All of the volunteers were in monogamous relationships with female partners and had normal sperm counts at the beginning of the study.

The men were given an injection every eight weeks, consisting of 1,000 milligrams of synthetic testosterone and 200 milligrams of progestin, a synthetic hormone derived from the female hormones progesterone and estrogen. The male birth control shot was developed to work in two different ways. First, the testosterone in the shot will trigger the male body to stop producing its own testosterone. Secondly, the progestin in the shot further halts the production of testosterone, while also affecting sperm production.

The researchers found this male birth control shot was effective for 96 percent of the users, lowering the men's sperm counts to the point that they were effectively infertile.

However, the study was terminated earlier than originally planned, in part due to the prevalence and severity of side effects experienced by the volunteers. These side effects included muscle pain, acne, depression, irregular heartbeat and mood swings. In total, 20 men dropped out of the study because they felt the side effects were too severe. After the study had ended, 25 percent of the men reported that they would not choose to use the injection as their personal method of contraception.

What Critics Are Saying

Some critics have pointed out that the side effects of this contraceptive shot, though proven to be poorly-tolerated by the men in the study, are comparable to side effects of current female birth control methods used by women every day. For example, the Mirena intrauterine device, a semi-permanent female contraceptive, can cause side effects like pelvic pain, abdominal pain, headache, acne, depression, heavy and prolonged menstruation, ovarian cysts and even perforation of the uterus.

Critics of the results of this study assert that the fact that men couldn't tolerate the same side effects experienced by many women reveals that men aren't willing to bear as much of the burden of contraception as women: Why should they put up with these uncomfortable side effects when the woman can?

In the end, society would benefit from a re-evaluation of our attitudes toward contraception. The responsibility of preventing pregnancy should be taken equally-seriously by both genders.