While the idea of not having to cook or do dishes may seem appealing, dining out regularly could contribute to an increased bodily concentration of potentially harmful substances known as hormone disruptors. Here, we discuss what hormonal disruptors are, common types of hormone disruptors, how you can be exposed and how these chemicals may adversely impact one's health.

What Are Hormone Disruptors?

Hormonal disruptors, also medically referred to as endocrine disruptors, are chemicals that impede the normal operation and production of the body's endocrine system. The endocrine system is an integral part of the human anatomy that consists of all the glands and organs that produce and secrete the hormones vital to physical, mental and biological development.

Continuous or excessive exposure to endocrine disruptors can precipitate significant hormonal imbalances that could result in low libido, infertility and other potentially serious consequences involving the reproductive, neurological and immune systems, as well as cause developmental disabilities in unborn and young children.

Some of the more common endocrine disruptors include:

These chemicals are often used to make the plastic products commonly employed to house food and household products. Phthalates are believed to separate from plastic easily, thereby contaminating food and water. Repeated or increased exposure to such substances may lead to the development of illnesses like thyroid disorders, diabetes and reproductive problems like disrupted sperm creation.

Scientifically classified as Bisphenol A, BPAs comprise the chemical makeup of the cans and bottles that store many popular foods and beverages. However, these substances are also found in items individuals frequently touch such as cell phone covers and the paper receipts typically administered with most purchases or banking transaction. This is noteworthy because skin absorption is among the quickest ways these potentially detrimental substances enter a person's body. Excessive or uncontrolled exposure to BPAs might induce developmental maladies like early-onset puberty, a host of reproductive issues, an increased risk of cancer, obesity and heart disease.

These substances are contained in products such as plastics, paint, electronic devices and furniture as a means of ensuring said items are less combustible. Safety benefits aside, flame retardants are notorious for disrupting the thyroid gland which could impact numerous bodily regions and manifest in a wide array of symptoms.

These chemicals are used to prevent insects and other creatures from contaminating food and drinking sources. Such products are commonly applied to water supplies, in addition to the fruits and vegetables people consume. People regularly ingest small amounts of pesticides. That said, the intake of such substances over the long-term could result in thyroid disturbances in adults and the development of Attention Deficit Hyperactivity Disorder (ADHD) in young people.

Parabens, Triclosan and other Petrochemicals

These materials are found in body care products like soaps, lotions, creams, oils and various cosmetics. Such chemicals are absorbed through a user's skin and eventually collect in the bloodstream. Should blood concentrations continue to elevate, the body might experience exorbitantly high levels of estrogen. Excessive amounts of this hormone may increase a woman's chances of developing specific types of cancer, as well as potentially serious reproductive system issues including endometriosis and Polycystic Ovarian Syndrome (PCOS). 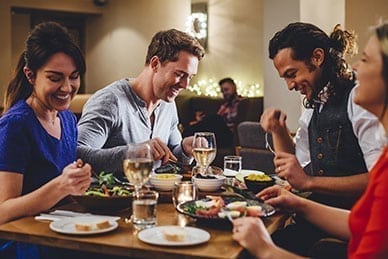 The findings of a recently published study suggests that dining out might increase your chances of becoming exposed to endocrine disruptors. Scientists conducted an examination of more than 10,000 people between 2005 and 2014. After surveying the subjects eating habits, researchers discovered that those who dined out the previous day or evening averaged a 35 percent higher concentration of the notorious hormone disruptor phthalates than those who purchased yesterday's meals at the supermarket. Phthalates levels were measured by examining the participants' urine samples.

Medical professionals opine that a possible reason for this phenomenon could be that food served in restaurants and cafeterias is often stored in plastic containers that contain high levels of phthalates. The most disturbing statistic uncovered was that, on average, the children studied displayed greater phthalates levels than adults.

You can potentially limit your exposure to endocrine disruptors by practicing some of the following tips: