Are You Getting the Nutrients Needed for a Healthy Libido?

Low libido is a common complaint among many people today. Factors such as stress and too little exercise can contribute to low libido. However, poor nutrition is often the biggest culprit and one that is rarely acknowledged. Every process in the human body relies on a steady supply of nutrients in order to function optimally and when these cannot be obtained in the proper amounts, the body begins to ration them according to the most important processes. Because maintaining a healthy libido is not critical, it is often the first thing to go.

Unfortunately, focusing on a nutritious and varied diet won't always solve the problem. Modern foods are frequently lacking in the key nutrients required for sexual maintenance. In order to correct libido-killing deficiencies, it's often necessary to take a dietary supplement that provides the key vitamins and minerals needed for a healthy libido.

Boron is a trace mineral, which means your body requires only small amounts of it for optimal health. Unfortunately, most people receive only half of the daily recommended amount of this mineral. Boron has a dramatic effect on hormones and the usage of other minerals in the body. In men, it increases levels of free testosterone, the unbound form of the hormone that exerts obvious effects on the body. In women, boron boosts levels of both estrogen and testosterone, which can greatly improve a flagging libido. Furthermore, boron can help menopausal women find relief from vaginal dryness, loss of bone density, weight gain, hot flashes and other unpleasant symptoms associated with this change of life.

Zinc is yet another important mineral that exerts significant influence over sexual function and libido in both men and women. It's essential for the production of testosterone in both genders, which is the primary supporter of a healthy libido. In men, it has even greater importance. Zinc is needed for the production and maturation of sperm cells and low levels of the mineral have been linked to infertility, poor erections, low sperm count and poor sperm motility.

Niacin, also known as vitamin B3 or nicotinic acid, is important for sexual health and a healthy libido. However, it's often difficult to obtain enough of it through diet alone due to modern growing, storage and processing methods of foods. Niacin improves blood circulation throughout the body, which has a significant impact on sexual function. In women, increased blood flow from niacin enhances vaginal moisture, sensitivity and response to stimulation. In men, it can help them achieve higher-quality and longer-lasting erections. In fact, a 12-week randomized, parallel-group, placebo-controlled study was published in the Journal of Sexual Medicine that tested the effects of niacin on men with erectile dysfunction. 160 men were divided into two groups with one receiving niacin and the other receiving a placebo. The group that was given a daily oral niacin supplement for 12 weeks showed dramatic improvements in erectile function.

The biologically-active metabolite of vitamin A, retinoic acid, is an essential ingredient for optimal testosterone levels in men. This nutrient supports the proper function of the leydig cells, special areas of the testes that produce testosterone. In women, the nutrient supports healthy levels of estradiol and testosterone, thereby supporting a healthy libido. Food sources of vitamin A include eggs, pastured meat, wild game and wild-caught fish.  Even so, because it's difficult to acquire enough from food alone, supplementation is strongly recommended. 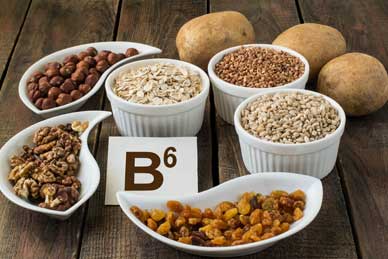 Also known as pyridoxine, vitamin B6 is something to consider for anyone who wants to enjoy a higher libido. This nutrient works by reducing levels of prolactin, a hormone that inhibits sex drive, lowers testosterone, hinders erectile function and makes orgasm difficult to achieve. Vitamin B6 has also been shown to increase levels of growth hormone. This may be particularly beneficial, as it allows for greater muscle growth, which only further supports testosterone production and sex drive.

Many things can cause people to experience a flagging libido, but nutrition often plays a critical role. By obtaining more of certain vitamins and minerals in your diet through the use of a high-quality supplement, you can enjoy a more vigorous and satisfying sex life.