Maca root, or simply maca, is a plant related to radishes and turnips. It only grows in the Andes mountains in central Peru, where it has been cultivated by native people for at least 2,000 years. Maca root is rich in nutrients, making it a staple food, and also serves traditional medicinal purposes including increasing fertility, raising libido, boosting energy and helping the body deal with stress. Because maca root provides energy, it is gaining more attention in the West as an ideal coffee alternative.

Why Look for a Coffee Alternative? 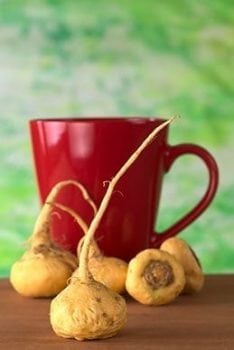 More than half of Americans drink coffee every day. Since coffee became available in England starting in the 1500s, it has only continued to grow in popularity. Some drink it just for the taste, but many drink it the energy-boosting effects. Although the caffeine in coffee certainly increases energy, it also carries with it many negative side effects.

Caffeine increases energy by stimulating the central nervous system. With an overactive nervous system, you may feel more energetic but can also experience anxiety, nervousness, irritability or agitation, restlessness, increased heart rate and hyperventilation. Caffeine can disturb your sleep due to its effects on the central nervous system. Even worse is that when caffeine keeps you up at night, you may compensate for this sleep deprivation by drinking more caffeine in the morning, thus creating a vicious cycle.

This heightened arousal of the nervous system leads to excessive cortisol production. Cortisol is a hormone secreted by the adrenal glands in response to stress. Although cortisol is definitely useful in real survival situations, chronically elevated cortisol levels are harmful to your health.

What Health Problems can Arise?

When cortisol is elevated for long periods of time, as in those who drink coffee every day, it increases your risk of:

Other possible side effects of drinking coffee can include stomach ache, nausea, chest pain, ringing in the ears, muscle tremors or twitching and heartburn. Caffeine is also a diuretic, meaning that it pulls more fluid from your tissues to be excreted by your body than normal. This means that drinking coffee can lead to dehydration and frequent urination.

Maca as a Coffee Alternative

One of the traditional uses of maca root is to increase energy and vitality. There are multiple scientific studies that support this notion, making maca a great coffee alternative. For example, a 2009 study conducted at Northumbria University placed cycling volunteers into two groups. One group consumed maca powder for two weeks, and the other group was given a placebo. After two weeks, both groups completed a 25-mile cycling course. While the placebo group did not experience any change, the maca powder group significantly reduced their course times. Another study, conducted in 2001, found that maca supplementation increased energy in rats, allowing them to sustain physical activity for longer.

It is not known exactly how maca increases energy. It may be in part due to its high nutrient content, especially its B-vitamin content. However, it is also very likely that there are energy-boosting compounds present in maca root that we don't know about. More scientific research is needed to fully understand maca's mechanism of action.

Other Reasons to Add Maca to Your Diet

Many of the traditional medicinal uses of maca are supported by science. This South American plant can give you energy, increase your libido, boost your mood and reduce stress. Even if you aren't convinced by the studies done so far for medicinal use of maca, adding maca to your diet is still a great idea because it offers superior nutrition. One ounce of maca powder contains:

Maca is easy to incorporate into your diet. You can add maca to many recipes, such as an easy-to-make maca smoothie, or take a quality maca supplement such as Macabido.