For centuries, there have been many pervasive myths and misconceptions about women's sexuality. In most cases, the truth might surprise you. Here are five important facts about female libido.

Many assume that women naturally become less and less interested in sex as the years go by. Menopause is often considered a leading factor in this loss of libido, due to the drastic drop in hormones that occurs during this time. In reality, age-related loss of libido is an over-generalization. Female libido is very individual thing, and although many women indeed experience a decrease in sex drive as they age, others' sex drives stay the same or even increase. A sudden renewal of sexual interest during menopause is definitely not unheard of. Statistics show that at least one-fifth of women over 70 are still having sex. Plus, many women report that sex only gets better and better as they grow older. Sex later in life can actually be something to look forward to.

2.  The Sex Drive Has Complex Origins in the Brain

The sex drive may have some basis in other parts of the body, but the majority of its origins take place in the brain. The hypothalamus controls sex drive along with hunger, thirst and aggression, but this is still only a small piece of the story. Sexual desire involves numerous other regions of the brain. These include the amygdala (responsible for visceral emotions), the nucleus accumbens (which controls the release of dopamine and is a molecule that lets us feel a sense of reward), the ventral tegmental area (which actually releases dopamine) and the pituitary gland (which releases endorphins that let us feel pleasure), plus oxytocin (which creates trust, intimacy and emotional bonding).

Medical science has known for decades the profound effect brain activity has on sexuality. When something goes wrong in the brain, it can have surprising sexual side effects. One patient, known as Mrs. C. W., complained to her doctor of waking up in the night with uncontrollable sexual desire. Over the years, her spells became worse, happening more frequently and in the day time. Eventually, her nymphomaniac spells began to be followed by seizures. More than 10 years after the start of her condition, her doctor finally found a slow-growing tumor in her skull, pressing up against her brain. After the tumor was removed, Mrs. C. W.'s problem vanished. Her doctor presented his findings to the Chicago Neurological Society in 1944.

3.  Medications Can Reduce Your Libido 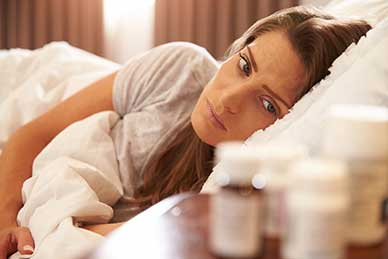 When a woman experiences a noticeable drop in her libido, she may be left scratching her head. One of the most common reasons for sudden loss of libido is because of a medication. About 15 percent of women who take hormonal birth control pills experience a drop in libido because of it. Antidepressant medications are an even bigger culprit, with figures for negative sexual side effects ranging from 30 percent to 70 percent of people who take them. In addition to reducing the desire for sex, antidepressants can make orgasm difficult or impossible. However, taking antidepressants isn't a death sentence for your libido. One study found that patients taking antidepressants experienced an increase in sex drive after taking a maca root supplement.

4.  Stress Can Easily Put a Damper on Sexuality

You probably already know that feeling stressed out can take away your desire for a romp in the hay. However, this isn't just because you feel frazzled and other things are on your mind. There is also a physiological basis to this. Cortisol is a hormone produced by stress, and when stress becomes chronic, so do the elevated cortisol levels. Chronically elevated cortisol levels suppress your sex hormones, which leads to lower female libido. It's important to relieve stress in healthy ways such as taking a warm bath, meditating, or getting a massage, rather than in unhealthy ways, such as drinking alcohol. Unhealthy stress-relieving tactics like drinking alcohol actually will increase your stress in the long run and could destroy your libido even further.

5.  You Can Easily Boost Female Libido

It's no fun when your sex drive vanishes. Luckily, it's surprisingly easy to get it back. Of course, you'll want to talk to your doctor about switching any medications that you think are lowering your libido, and also take steps to reduce the stress in your life. Positive lifestyle changes, such as getting more sleep and exercise, can also make a huge difference. A study published in the Journal of Sexual Medicine found that short-duration, intense cardiovascular exercise significantly enhanced women's sexual arousal. Scientifically-proven natural supplements are also a good bet. One of the most promising supplements for female libido is maca, a root vegetable native to South America. One study found that subjects who took maca for 12 weeks had increased sexual desire at the end of the study. There are more studies like this, and maca appears to work for men and women alike. It's especially helpful if your low libido is caused by antidepressants or by a hormone imbalance.