Work Stress: Why it's Worse for Women

The Effects of Work Stress on Women's Bodies

A large dog barking at you, your house burning down, missing an important deadline and feeling unwelcome in a social situation are all examples of environmental stressors. Your brain interprets these events as threats, triggering a reaction in the hypothalamus, a small region at the base of your brain. The result? Hormones such as adrenaline and cortisol are released into the body following these stressful stimuli.

Cortisol in particular says a lot about the state of your body, and also has far-reaching health effects. Researchers at Indiana University Bloomington examined the daily stress hormone patterns from over 400 women who were considered "token" women at work. (In academic terms, a "token" group is a group constituting less than 15 percent of a company's workforce.) It was found that the women who worked in fields where 85 percent or more of the employees were men had less-healthy cortisol levels than both women who worked in fields with better gender equality, and the men who worked in those same places. The authors of the study noted that since cortisol production is typically the result of social stressors rather than physical stressors, the study suggested that the added work stress women experienced was due to feeling socially threatened.

This is a real problem. Not only will work stress make women feel less happy with their lives, it also has negative repercussions on physical and mental health. Long-term stress can contribute to, or even cause, problems including anxiety, depression, cognitive impairment, problems sleeping, digestive problems, weight gain, heart disease and more.

Why Exactly Does Work Stress Women Out? 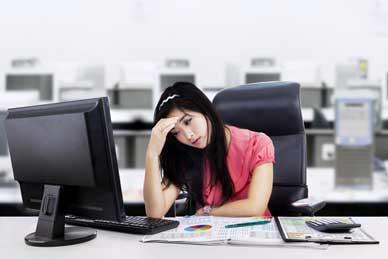 One of the most common problems women report experiencing in the workplace is that they do not feel properly heard by their male colleagues and superiors. Differences between male and female communication styles can cause problems. When a woman behaves in a manner that is assertive or authoritative, men are likely to interpret her behavior as being aggressive, bossy, or domineering, although they would be more accepting of the same communication style in men. This makes women less likely to want to be assertive or take on authoritative roles.

There is also a pattern of bias against women from superiors. Many women report that in the workplace, their superiors assume they are incompetent as a default, whereas their male colleagues are assumed to be competent workers until they show that they are not. Another way bias against women may manifest is through assignments. If the good or ambitious assignments are routinely prioritized toward males of the same rank in the company, women will feel ostracized.

Researchers have shown that female employees are 66 percent more likely to be given a recommendation to alter their communication style, and Stanford University also found that men receive, on average, twice the positive work feedback than women. Another factor holding women back from advancing within their company is the fact that being female makes them less likely to receive a sponsorship.

Possibly the most effective method of reducing workplace inequality is through legislation. For example, about a decade ago a law was passed in Norway requiring that at least 40 percent of company board members be women. Those who this law has affected agree that it has had a positive affect on company social environment.

It's also the responsibility of individual companies to ensure that their female employees are not under-acknowledged. The easiest way to do this is through assignment tracking, to ensure that the more ambitious workplace tasks are not assigned mostly to males. More and more companies in recent years have implemented policies to ensure gender equality in the workplace, and the playing field will only continue to get better.

Any individual can decrease their cortisol levels through good lifestyle practices. Taking care of physical health through regular exercise and a healthy diet will help enormously. Supplements containing stress-relieving ingredients like lavender and eleuthero can help protect your body against the effects of everyday stressors. Non-physical practices that are proven to reduce cortisol levels include meditation, connecting socially, having a good sense of humor, and listening to music that you love.