Researchers from Georgia State University recently set out to examine how social stress alters gut bacteria of winners versus losers in social conflict settings. The results weren't what they expected.

The study involved Syrian hamsters, a species chosen for how rapidly they establish dominance hierarchies. The hamsters' gut bacteria was analyzed before and after the animals were allowed to interact. Researchers initially predicted that the subordinate hamsters, being the most stressed of the group, would be more affected by conflict. Their findings, however, showed that social stress led to similar changes overall in the hamster's microbiota, regardless of who won.

According to Dr. Kim Huhman, professor of neuroscience at Georgia State, "we found that even a single exposure to social stress causes a change in the gut microbiota, similar to what is seen following other, much more severe physical stressors, and this change gets bigger following repeated exposures."

An even more surprising finding from the data was that the presence of some bacteria seemed to be an indicator as to whether an animal would become a winner or a loser. According to co-author Dr. Benoit Chassaing, "these findings suggest that bidirectional communication is occurring, with stress impacting the microbiota, and on the other hand, with some specific bacteria, in turn, impacting the response to stress."

Stress wreaks havoc on the entire body, but the gut seems to be hit especially hard. An exceptionally complex organ, the human gastrointestinal tract houses over 100 trillion microorganisms which are essential for the body's homeostasis. The human gut is home to the enteric nervous system, which consists of some 500 million neurons and, just like the brain, makes use of a number of neurotransmitters such as serotonin and dopamine.

The human brain communicates stress directly to the enteric nervous system through the gut-brain axis, directly impacting the function and composition of gut flora. According to research, exposure to stress leads to changes in the diversity of these microorganisms. These stress-induced changes promote an overgrowth of harmful bacteria and can cause a higher susceptibility to infection and inflammation of the gut.

The gut-brain axis's link between the central nervous system and the enteric nervous system is bidirectional, meaning that just as stress affects gut bacteria, the gut's flora also have a direct effect on how we cope with stress. The microbiome affects the function and structure of key stress-related brain regions, such as the amygdala, which is vital to regulating psychological and physiological responses to stimuli that incite stress, anxiety or fear. A variety of stress-related conditions, such as anxiety, depression, chronic fatigue and irritable bowel syndrome, have been attributed to an imbalance of gut microbiota.

Gut bacteria are also responsible for producing many of the neurochemicals that the brain uses to regulate processes such as learning, memory, mood and sleep. Research suggests there may even be links between gut microbiota and neurological disorders such as autism and schizophrenia. Human research is still in its infancy, but the effects of the gut's microbiome on the brain seem to be evermore wide-reaching. 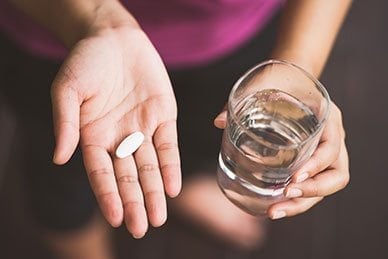 Eat a Whole-Foods Based Diet Full of Probiotic-Rich Foods

For a powerful powerful brain boost that also promotes gut health, ditch the sugars and processed foods in favor of a well-rounded diet filled with healthy, natural probiotic laden foods such as kefir, sauerkraut and apple cider vinegar.

Supplement Your Diet With Prebiotics and Probiotics

While natural and fermented foods are the best way to ingest good bacteria, modern diets and lifestyles just don't always allow for the intake of everything we need, and that's okay. Probiotics help control bad gut bacteria by promoting the growth of good bacteria and have been shown to reduce stress and lessen anxiety.

Use Adaptogens to Relieve Stress and Return the Body to Stasis

Antioxidant-rich adaptogens reduce stress levels, provide balance to the body and boost your natural resilience to stress. Macabido includes adaptogenic herbs like eleuthero, maca and ginseng, all of which are known to help relieve the effects of stress on the system while supporting the body to better deal with stress.

Incorporate Essential Oils Into Your Routine

Some essential oils, such as bergamot, peppermint and clove, are powerful stress busters that also promote gut health through their anti-inflammatory and antimicrobial properties.