A recent study examining menopause and memory suggests that women who enter menopause at a later age might be able to display greater memory skills than those who are stricken with the condition earlier in life. In this article we'll explore menopause, its connection to memory, the results of a recently released study connecting late onset menopause and stronger mental acumen as well as the skills women might employ to sharpen their memory as they age.

Menopause is a naturally-occurring medical phenomenon that eventually impacts all women, but most commonly occurs in the late forties or early fifties. When menopause occurs, the ovaries cease production of vital reproductive and sexual hormones. In addition, menopause marks the end of a woman's ability to become pregnant. Furthermore, decline in systemic production of critical substances like estrogen may precipitate a host of bothersome symptoms and impact many areas of the body.

Rapid hormonal decline and fluctuating bodily concentrations of hormones such as estrogen are believed to impact the memory of women early in the menopausal stages. Several scientific studies have shown that women in menopause's initial periods displayed difficulties with concepts like verbal skills and remembering the contents of shopping lists. Scientists opine such occurrences might happen because estrogen is thought to impact the area of the brain responsible for memory and verbalization.

Other mental health professionals and researchers suggest that estrogen might play an important part in stimulating and maintaining the brain's neurotransmitters. These messengers contribute to the brain's ability to store and recall memory. In addition, some members of the scientific community believe estrogen might aid the brain in its creation of neurons. These cells are said to emit electrical impulses that stimulate brain regions that oversee memory as well.

Though these memory difficulties are bothersome and upsetting, researchers are confident they are typically not a sign of a more serious medical or mental health disorder such as dementia or Alzheimer's Disease and are transient, with most affected women regaining their memory skills after the initial stages of menopause have passed. 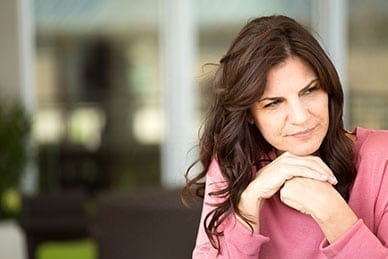 Information discerned through the findings of a recently released study might refute the notion that menopause and memory prove to be a detrimental combination. A team of British scientists concluded that women who begin experiencing the manifestations of menopause at a later age than normal might actually notice an improvement in their memory skill set as they grow older.

This particular study tested the memory capabilities of more than 1,300 women over several decades. Researchers concluded that those subjects who entered menopause at a later stage, possibly up to as many as 10 years older than the average age at which the condition typically begins, were able to recall written words with greater acumen than the participants whose menopause started at a more typical age range. Scientists caution that, while these findings are encouraging, they do not guarantee that late onset menopause will prevent the development of more serious, perhaps life-threatening mental health disorders such as dementia and Alzheimer's Disease.

It is important to note that memory loss might be caused by a variety of medical or mental health-related issues and a menopausal woman should not assume the mental malady is automatically linked to menopause. Memory problems may be associated with the normal process of aging. In other cases, recollection difficulties may be the beginning stages of serious mental illnesses like dementia and Alzheimer's Disease. However, memory issues may also be precipitated by other causes including blood vessel blockages in and around the brain, specific prescription medications, nutritional deficiencies, stress, anxiety and depression. Medical professionals also warn that women should never ignore persisting or concerning memory difficulties.

Can Women Employ Steps To Improve Their Memory?

Women might be able to strengthen this important cognitive function or alleviate the manifestations of menopausal-induced memory loss by employing one or more of the following techniques.

Also called brain exercise, this task could be accomplished by engaging in activities including, but not limited to, crossword puzzles, trivia games and concentration exercises. The more stimulation the brain gets, the greater its memory capabilities might become.

Getting an appropriate amount of sleep helps the mind relax and regenerate.

Physical activity not only strengthens the body and enables women to release tension and anxiety, but may also help their bodies release hormones.

Eating more nutritious, healthier food might also improve memory. Certain edible products, such as vegetables and items containing Omega-3 fatty acids like some fishes are rife with substances such as antioxidants, which are believed to stimulate brain power.

Engage In A New Hobby Or Hone Existing Skills

Finding a new hobby or striving to improve an existing skill might improve your brain's ability to focus.