Aging and Low Libido in Men

As people age, it's just a fact that hormone production slows down. Although this occurs in both men and women, men tend to notice the sexual side effects, including loss of libido, as they age. For men, understanding the male libido and the physiological systems that fuel a man's sex drive and performance is the first step in discovering how to revive your sex drive and get things back on track.

Aging and Low Libido in Men

Believe it or not, loss of libido is not as common in men as it is in women. Even as both sexes age, men continue to think about sex twice as often as the average woman does. However, because men think about sex so often, sexual issues are more bothersome to them on a psychological level, and these psychological issues only tend to make problems with libido and performance worse.

It's All in Your Head

A man's libido is all in his head. Really. Two areas in the brain, known as the limbic system and the cerebral cortex, control a man's drive and performance, including the frequency and quality of his erections. Because these systems are so powerful, many men can orgasm in their sleep, and some can even orgasm while they are wide-awake—without any stimulation —just by thinking about a sexual experience. It is all in their brain, and hormones like testosterone fuel it all.

The Rise and Fall of the Testosterone Empire 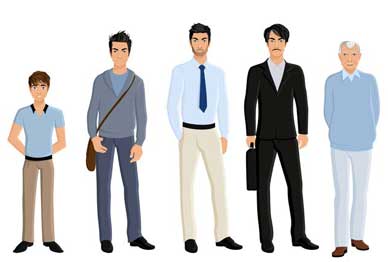 Men experience their first burst of testosterone six to seven weeks after conception, and this burst fuels the development of the penis, the testicles and the scrotum. Studies performed at the Mayo Clinic show that five-month-old babies often have the same amount of testosterone in their bodies as post-pubescent men, too. In fact, a man's testosterone levels start dropping at around the age of 18, once the sexual organs have reached their full size. These hormonal changes effect men in every single stage of their lives, too.

Although it is unfortunate that so many men must deal with these physical and psychological symptoms at such a young age (after all, 40 is the new 30), there are plenty of things that men can do to combat the lack of drive and inability to perform.

If the symptoms are especially bothersome, or if they have a significant impact on your relationship, see your family doctor. He or she can provide some tips on rejuvenating your sex life naturally.

Although plenty of department and drug stores these days market products that claim to restore sexual health and help low libido in men, do your research. Not all of these products are what they seem, and some may have harsh side effects. Maca root is one of the world's oldest and most revered herbal supplements, and almost everyone who uses it experiences a dramatic increase in libido.

Almost every man will experience loss of libido, lack of desire, and erectile issues at some point in his life—especially as he gets older. Don't think that your age will automatically prevent you from enjoying fulfilling, satisfying sex, though. Men and women alike can get that desire back at almost any age with all-natural ingredients that have been used for thousands of years.

Sleep Apnea May Contribute to Low Libido
The Low-T Epidemic: The Primary Causes of Low Testosterone in Men
Can Hormonal Imbalance Cause Low Libido?