Studies Prove Effectiveness of Yoga for PMS and Other Menstrual Disorders

A recent systematic review of 15 medical studies has found that yoga for PMS and other disorders of the menstrual cycle is an effective natural treatment. Other natural remedies have also been proven to help relieve some of the uncomfortable symptoms often associated with menstruation.

In the days leading up to her period, a woman may experience symptoms like lack of energy, bloating, acne, headache, breast tenderness, mood swings, excessive hunger or irritability. Collectively, these symptoms are known as premenstrual syndrome (PMS), a condition that affects about 30 percent of women. Scientists believe PMS may be caused by the way estrogen and progesterone interact with neurotransmitters in the brain.

While about a third of women get PMS, at least 50 percent of women also have painful cramping once their period starts. It is believed menstrual cramps are due to the uterus contracting too strongly. Some uterine contraction is necessary to expel the menstrual blood, but too much causes pain.

Both PMS and cramps can significantly disrupt a woman's life. Some women cannot function well at school or at their job because of the pain or mood disruptions. Fortunately, new research sheds light on an easy way to relieve PMS and period pains. 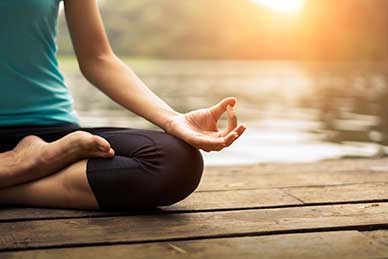 Jennifer Oates at King's College London has released a systematic review, published in The Journal of Alternative and Complementary Medicine, of 15 published studies that looked at the effects of yoga on menstrual problems. The review found that practicing yoga for PMS and period cramps is an effective treatment. This practice also works for more serious menstrual disorders such as amenorrhea (the absence of menstruation) and oligomenorrhea (the condition of having abnormally long menstrual cycles).

Essentially, women who practice yoga at least every other day enjoy more comfortable periods, fewer symptoms of PMS, a more regular cycle, enhanced mood and added relaxation. Sub-types of yoga that also include breathing exercises in addition to the yoga poses may be even more beneficial.

Yoga works for both mental and physical symptoms. This may be due to the way it works on the body's stress response. However, as mentioned earlier, yoga can also relieve amenorrhea and oligomenorrhea, which are menstrual disorders caused by hormone disruption. This discovery implies that yoga may somehow work to balance hormones.

Aromatherapy: Another Alternative Therapy for PMS

Aromatherapy is another alternative health therapy that has been gaining more and more support from the medical community. One study done in Egypt divided 95 women into two groups. One group was to receive an aromatherapy treatment of cinnamon, clove, rose and lavender oils massaged into the abdomen once daily for the seven days leading up to the start of their period. The other group received their abdominal massage with plain, unscented almond oil.

It is not known exactly how most essential oils work. It is thought that when their aromas are inhaled, they act to calm down the limbic system, which is the emotional center of the brain. However, this study involved massaging essential oils into the abdomen. It is likely that the beneficial chemical compounds in essential oils can be absorbed through the skin and reach organs such as the uterus. The researchers involved in this study believe that lavender and clove act as painkillers, cinnamon reduces hormones responsible for muscle cramping and rose reduces excessive bleeding.

Natural Supplements for the Menstrual Cycle

Conventional treatments for menstrual pain can be lackluster. Not every woman tolerates over-the-counter painkillers very well—in fact, up to 50 percent of people do not tolerate ibuprofen and other NSAIDs very well. Such medications can cause gastrointestinal side effects and taking too much of them or taking them for too long can cause liver and stomach problems.

For some people, NSAIDs aren't even effective for relieving menstrual pain. It can also be a challenge to find medications that actually relieve PMS symptoms such as food cravings and mood swings.

Natural herbal supplements may be the answer for many women. One potent herb is saffron. In one study, 76 percent of women who took it saw their PMS symptoms slashed in half. Saffron has also been found to be a potent depression treatment, indicating that it is essentially a mood-balancing herb. Other great botanicals for PMS symptoms include maca root, magnesium and ginkgo biloba, which reduces PMS symptoms by up to 24 percent.

Herbs can also help relieve the pain of menstrual cramping. One study found that ginger is as effective as ibuprofen for menstrual pain; this herb is very affordable and easy to add to your diet. Simply mix one gram of powdered ginger, or about one-quarter teaspoon, into a cup of water. Drink this daily. Valerian is another helpful one, and it has the added benefit of relieving anxiety and promoting good sleep.

If you are a woman who menstruates, there is a great chance you are bothered by cramps or PMS every month. If you are disappointed in the lack of results from conventional medicines, or simply would rather take a natural, holistic approach, it may be time to try something different. For maximum relief from menstrual discomfort, take up a regular yoga practice, break out the essential oils and add herbs like saffron and maca root to your diet.