University of Michigan scientists discovered that specific film genres, as well as the characters in them, could have a profound effect on one's hormones. These researchers concluded that cinema was particularly influential over the testosterone levels of both men and women. Men who viewed films carrying more feminine themes experienced a drop in this vital hormone, while women noticed little if any change. That being said, men who watched more male-oriented, action-based films featuring powerful and dominant male characters experienced a jump in their testosterone levels. However, female viewers of these same films experienced a decline in their bodily concentrations of testosterone.

The scientists opined that such biological occurrences might be caused by a concept known as character identification. Men are considered more likely to identify with a strong, influential male who takes charge and wins in the end. Additionally, these researchers believe women do not identify with such depictions. The chemical result is a male increase in testosterone and a female decline in the substance or vice versa when the roles are reversed.

Movies are also believed to stimulate hormonal production from a biological standpoint. Films with significant ebbs and flows of tense action to times of relaxation may cause fluctuations in the body's production of stress hormones such as cortisol and adrenaline. Unexpected or significant moments of extreme violence towards a particular movie character or uncertainty over what might happen to said individual may precipitate sudden rushes of stress hormones to help keep viewers engaged, interested and invested in the film's outcome.

Watching certain movies can do more than just throw your hormones out of whack. What you see on the screen can also influence your immune system, blood pressure and more. Here are just a few of the other physiological effects you could experience simply by watching your favorite film. 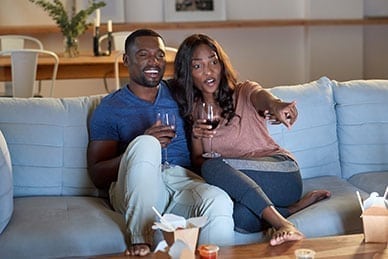 Certain films, especially those with numerous characters, complicated plot lines or a plethora of special effects, could stimulate brain strength and focus by forcing a viewer to zone in and pay closer attention to all the events that are taking place. Moreover, movies with a significant amount of optics such as 3-D films may require an attendee to focus his or her eyes on many objects at once or constantly moving images which might sharpen sight abilities.

Films, especially those that elicit laughter, might improve a watcher's immunity. Scientists opine that laughing improves overall mood and reduces systemic concentrations of stress hormones, which are known to debilitate the immune system. Stronger immunity might prevent those fortunate enough to possess it from developing nagging or perhaps more serious illnesses.

Movies may strike emotional chords with those who watch them. Psychologists maintain that when people attend films, they have a tendency to step into the lives of the characters they are viewing on screen. For example, if the movie's characters experience sadness, the viewers might cry or feel down. Should the characters overcome a steep obstacle, the film attendee may feel a burst of inspiration. Characters might experience a variety of other emotions. However, the particular feelings they are experiencing might also be transferred onto those watching their journeys on screen.

While going to films can be an enjoyable, educational and calming experience for many, specific genres of movies might be harmful for others. Cinematic expressions with violence, tension and extreme excitement like horror, thriller and action films might increase the heart rate and raise blood pressure. Such occurrences could potentially be dangerous to individuals with a heart or other cardiovascular condition or an existing case of high blood pressure.

Certain films, especially those in which some characters or aggressive or violent with other characters, might stimulate aggressive tendencies in susceptible individuals.

Some movies may depict beliefs that certain people need to act and appear in a specific manner. Some sociologists opine this is particularly true when it comes to defining what the acceptable body image of a woman should be. Psychologists further caution that vulnerable girls and women who are repeatedly exposed to such depictions might be susceptible to developing serious, potentially life-threatening mental health conditions such as eating disorders like anorexia and bulimia.

Can movies impact the body? Many medical professionals, mental health specialists and sociologists believe they do. In a nutshell, viewing certain types of films can benefit one's health, while watching others might not.