Anxiety and Dementia: Could Relieving Stress Reduce Your Risk?

The findings of several scientific studies suggests that stress-induced anxiety occurring during an individual's middle age might precipitate the development of dementia in his or her later years. Here, we will take a brief look at dementia, examine stress and its causes, review the results of the aforementioned studies and offer methods people can employ to lessen incidents of stress or ameliorate the condition's bodily impact.

The term dementia does not describe a particular illness but a collection of manifestations characterized by a decline in one's mental and cognitive functions. Medical conditions known to precipitate dementia such as Alzheimer's Disease and cerebrovascular ailments like strokes or blood vessel disorders cause the stricken individual to experience a gradual and often irreversible loss of brain cells. Such events usually elicit symptoms like significant memory loss, difficulty executing once routine tasks, pronounced confusion and, in certain instances, hallucinations and violent outbursts.

Like dementia, stress is not considered a specific malady either. Medical professionals define stress as a physical, mental or emotional trigger that could manifest in any one or a combination of bodily symptoms impacting almost every internal system. Stress might be caused by any number of issues including but certainly not limited to job pressures, financial concerns, illness, impending deadlines and family concerns. In the short-term, stress can act as motivating factor to accomplish important goals. However, over the long haul, stress's long-term influence could result in bodily damage, especially the mind.

The Results Of Studies Linking Stress, Anxiety and Dementia

A team of English scientists collected information from four previously conducted studies that examined the mental health and lifestyles of roughly 30,000 individuals over a 10-year period. Researchers discovered one factor common to each study. The vast majority of those stricken with a dementia-related ailment later in later years experienced high levels of anxiety during mid-life.

It is important to note that these studies were not conducted as part of a greater experiment attempting to confirm that anxiety can be directly correlated to dementia. Therefore, researchers were unable to hypothesize what they believe might be the biological conditions or processes that may lead to mental decline in individuals who led exceedingly stressful existences in their younger days. That said, some of these same scientists opine that anxiety might elicit a chronic, elevated bodily release and eventual high blood concentration of stress hormones such as cortisol that, if not curbed, could one day harm various areas of the brain.

Some other medical professionals opine that stress hormones could also lead to a buildup of harmful substances that may precipitate dementia. Specific materials include amyloid precursor proteins (APP) and tau proteins. In addition, others think the accumulation of amyloid-beta plaque, less affectionately referred to as "brain gunk," clog and damage brain cells ultimately resulting in dementia-causing illnesses. The one issue that the researchers of the previously mentioned studies agree on is that people suffering with anxiety disorders or those who are exposed to excessive amounts of stress may reduce their risk of dementia and improve their overall, general health by addressing these problems.

What Steps Can You Employ?

With this information in mind, there are a number of practical steps you can take to help reduce the risk of stress-induced dementia later in life.

For some people, anxiety is not a transient issue that arises during tension-filled times but a chronic disorder that could have potentially serious health ramifications. Most medical professionals suggest that those dealing with anxiety on a regular basis seek medical help. A doctor should be able to diagnose the specific disorder bringing about the individual's anxiety and prescribe the appropriate treatments. 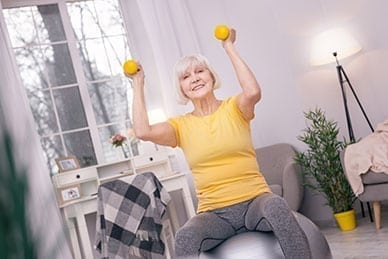 Almost everyone deals with some form of stress at one time or another. It is almost impossible to completely avoid stress. However, there are certain techniques one can employ that might help reduce one's exposure to stress and limit its impact upon the body. Such techniques include:

Medical professionals consider physical activity as a solid method of alleviating tension because such actions enable the body to regulate stress hormones. Those who exercise with greater consistency are less likely to experience a systemic increase in those potentially harmful substances.

Engaging In A Relaxing Activity

Hobbies one might enjoy such as writing, gardening, cooking, reading or listening to music can benefit the mind in the long run by strengthening its focus but may also help the mind and body settle down immediately.

Adhering To A Healthy Diet

Some people respond to high stress levels by eating greater quantities of products that typically are not beneficial for the body or mind like junk foods. Consuming a diet consisting of fruits, vegetables, grains and fish will provide important nutrients that keep the body and mind sharp.

Receiving An Adequate Amount Of Rest

Sleep is the body's best natural stress-buster. Those who receive increased amounts of sleep are less likely to feel the impacts of stress.

Taking the time to breathe can provide the brain with fresher and more oxygenated quantities of blood. In addition, deep breaths expel tension from the body.